September 22, 2019 Vita Historia
By the 1960s, of the hundreds of streetcar lines that had once been a primary mode of transportation in cities and suburbs across the United States in the first half of the 20th century, only a small fraction still operated, and usually only in city centers. Competition from automobiles and buses was one cause for declining ridership of streetcars, and supposedly the costs of installing and maintaining lines was higher than costs associated with infrastructure for cars and buses. The history of what happened in the major mid-century makeover of American urban mass transit is muddled, and one explanation for it that keeps popping up has to do with the machinations of the automobile manufacturers, chiefly General Motors (GM).
The idea springs from how GM bought out streetcar lines around the country, and then dismantled the lines, junked the streetcars, and signed city governments to contracts for purchase and ongoing use of the buses GM manufactured. GM also sold cars to urban and suburban commuters who found themselves with fewer alternatives than they had before the 1920s, when the streetcar lines were still thriving. That’s a neat story, and it certainly fits in with the behavior we have come to expect of large corporations and the executives who run them, but in this case it turns out to be a little too neat and only partially true. 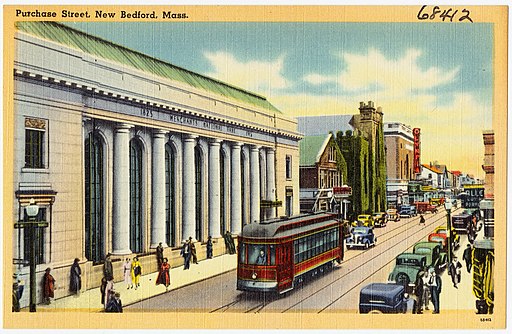 A postcard circa 1930-1945 depicts Purchase Street in New Bedford, Massachusetts. Photo from the Boston Public Library Tichnor Brothers collection.
Market forces generated by consumer preferences played the greatest part in the decline of ridership on streetcar lines starting in the 1920s and accelerating through the next quarter century. The streetcar lines were privately owned and the companies bore the costs of maintaining the tracks they operated on and other infrastructure costs, even though they used the same publicly maintained roads as buses and cars. The streetcar lines were more and more at a competitive disadvantage as public money benefited those other modes of transportation and as consumers came to prefer the relative freedom of driving their own cars or taking buses that weren’t restricted to tracks.

Comforting as it might be to blame the automobile and gasoline industries for ripping up streetcar tracks around the nation, depriving commuters of a useful commuting option, the truth in this case is that the public shoulders the greater responsibility. Individual consumers operating in their own self-interest took advantage of cheap gasoline and publicly financed road building, such as the interstate highway system started in the 1950s, to buy at least one car for every household. In most cities, taxpayers balked at public ownership of the streetcar lines, a move which would have saved many of the lines from the corporate scavenging that ultimately killed them off. In other words, GM and other auto and gas corporate interests didn’t precipitate the demise of the streetcar lines, but neither did they mourn their loss, and ultimately, of course, GM and the others profited greatly from the makeover of the American transportation system.

By the time of the 1959 release of Alfred Hitchcock’s North by Northwest, the streets of Manhattan were dominated by vehicular traffic, and mass transit options for New Yorkers were limited to subways and buses. Bernard Herrmann composed the music for the film, and Saul Bass designed the titles. The director makes his cameo appearance at the end of the title sequence.

More than a half century after streetcars were all but wiped off the map in America, they are coming back in spots like Brooklyn, driven by the desire of some people to get around town without the hassles of car ownership, the pollution of cars and buses, the blight of enormous parking lots, and the swallowing up of green spaces for more roads to alleviate the congestion on existing roads, only to have the new roads fill up as well. Streetcars powered by electricity generate pollution at a remove, to be sure, but as more power plants use renewable energy sources, that problem should lessen. Meanwhile, building out more mass transit infrastructure should take off the road some of the oversized vehicles too many Americans appear to love, and which the automobile makers and the fossil fuel industry love turning out for them since they are highly profitable. It has taken a century for Americans to learn anew the value of mass transit options like streetcars, and perhaps soon, before we reach the end of the line, gridlock on the roads will clear, and so will the air everywhere.
— Vita