Only the Best People

May 18, 2019 Editor
“When someone shows you who they are, believe them the first time.”
— Maya Angelou

In a recent poll conducted by Civic Science, 56% of Americans responded “No” when asked if Arabic numerals should be taught in the nation’s schools. Such breathtaking ignorance, as well as presumed bigotry, is enough to make the other 44% of Americans take to alcohol. Algebra would be more difficult without using Arabic numerals, even if there are a lot of letters mixed into the formulas. Substituting Roman numerals would only make the subject more confusing.

Civic Science also asked if the “creation theory of Catholic priest Georges Lemaitre” should be taught in science classes, and 53% said “No”, and of that percentage 73% were Democrats. That theory is actually the basis of the Big Bang theory. While the responses of the majority to both questions point up biases, the two questions do not do it in exactly the same way and therefore the responses are not entirely equivalent. 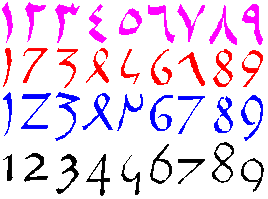 The evolution of Arabic numerals, from top to bottom. Rendering by Vispec.
The key word in the first question is “Arabic”, a term for people living predominantly in North Africa and the Middle East, most of whom are Muslim. By itself, the term describes only an ethnic group. Loading “Arabic” with negative bias is entirely the work of those responding to the term. The wording of the poll question does a good job of not giving anything away to tilt respondents’ attitudes toward the term.
The wording of the other question does not do as good a job since it includes the loaded phrase “creation theory”. It is most likely the case that most respondents had never heard of Georges Lemaitre and his “creation theory”. It is also most likely the case, however, that they had heard the phrase “creation theory” before, a phrase freighted with associations to fundamentalist Christian pseudo-science, even if it was more widely known as “Creationism”.

In as much as the respondents to both questions were reacting with knee jerk tribalism to a word or phrase embedded in each question without really understanding the question, then they are equivalent in their wrong-headedness. In both cases, a more truthful response would have been “Don’t know”, although apparently the poll takers offered only “No opinion” as a third option, a slightly different idea in logic, and not in mere semantics. In that way, both questions tease out the victory of tribalism over knowledge, but it is only the majority responses to the question about “Arabic numerals” that betray bigotry as well as ignorance, much as some might say they are part of the same continuum.

A clip from the “Primacy of Number” section of the 2002 meditative documentary Naqoyqatsi: Life as War. Philip Glass wrote the music, Godfrey Reggio directed the film, and Jon Kane did the editing.

There are a fair amount of assumptions here in parsing the answers to these two deceptively simple polling questions, and assumptions after all play a big part in bigotry. There are also the words of wisdom from the poet Maya Angelou which led this post. We can make educated inferences based on our experience and not have them fall into the well of roiling, unreasoning emotional assumptions and inferences that is bigotry. We can wake up and smell the coffee, as it were, to what only the best people, as they would have us believe they are, are up to in their bad faith quest to subvert the best intentions and best efforts of many, many others to improve human and animal lives and conserve the gifts of the Earth.
— Ed.

A Grain of Salt

November 13, 2016 Techly DoRight
The picture here of Harry Truman is in no way meant to conflate him with Donald Trump, but merely to illustrate the similar nature of their upset wins. In 1948, polls had the Republican challenger, Thomas Dewey of New York, ahead of Democratic incumbent Harry Truman. The Chicago Tribune, a newspaper which made no secret of its dislike of Truman, was so certain of his impending loss as it went to press late on the night of the election that it went ahead with the infamous headline “Dewey Defeats Truman.” Two days later, after Truman left his home in Independence, Missouri, where he had awaited the election results, his train stopped in St. Louis and he posed on the rear platform with a copy of the Chicago Tribune and with the former Democratic mayor of St. Louis, and in 1948 Postmaster of St. Louis, Bernard Dickmann. 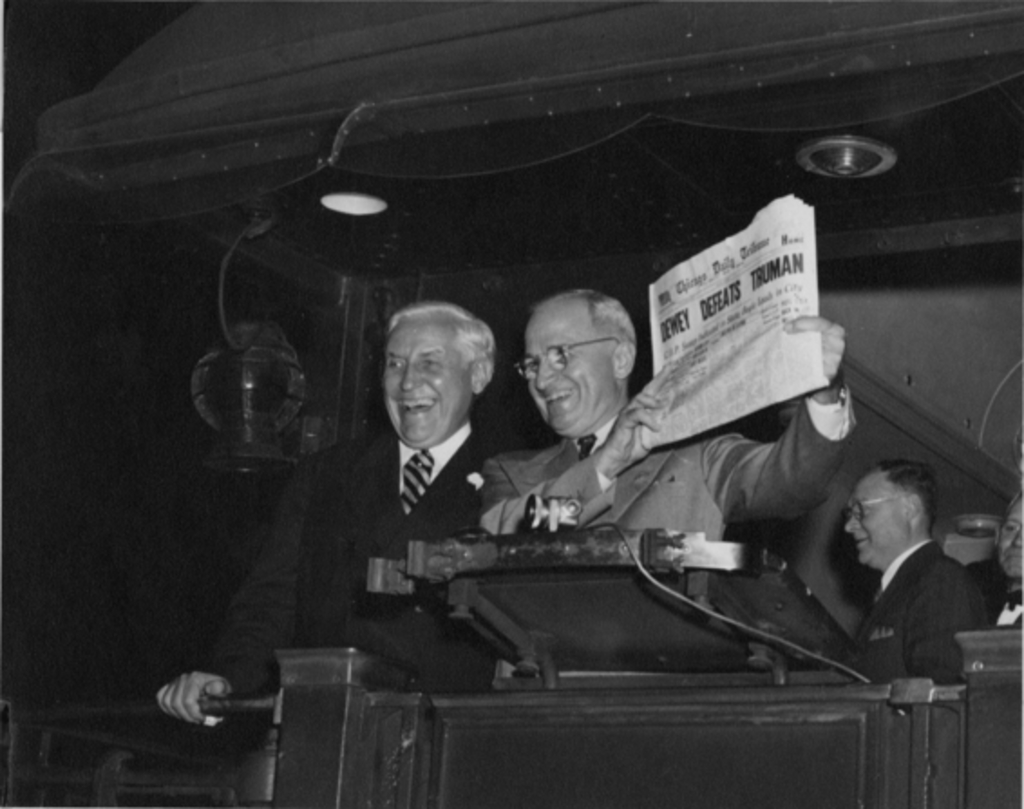 Harry Truman with Bernard Dickmann in 1948
Certainly in 1948 newspaper technology played a part in the Tribune’s error, on account of the extensive lead time needed to typeset the pages, photograph the plates, and print the paper. Other newspapers faced with the same technical limitations, however, did not make the same error. Confirmation bias, or wishful thinking, played a larger part in the decision by the Tribune brass to print that headline. They saw all the polls picking Dewey as the winner, and because they wanted Dewey to win – or rather, they wanted Truman to lose – they confirmed their bias in print.
As the 2016 election results came in, it became clear that most polls, which up until election day had Clinton ahead of Trump, were wrong again as they had been in 1948. Granted, Clinton narrowly won the popular vote, but at nothing like the three to five percentage points many polls gave her. It seems the electoral vote win by Trump was brought on by taking a few Rust Belt states away from Clinton, all of which the polls generally had either solidly in Clinton’s column or leaning her way. Two factors come to mind here in the disconnect between the polls and the election results, one having to do with the methods pollsters use and the other having to do with voters and media ignoring the disclaimer that comes with all polls, namely the margin of error, typically about three percent. That’s the grain of salt people should take when they read polls, but often choose to ignore.
A particular problem with predicting the 2016 presidential election was how quickly the race tightened up in the few weeks between the aftermath of the last debate, when the buzz nationwide was about a possible Clinton landslide, and the weekend before the election. Also, polling up to the last minute did not appear to show a change in the amount of voters who remained undecided. Most of the undecided voters appear to have waited until election day to go for Trump, and that shows in how Clinton’s numbers remained practically unchanged from the polls to the election results, while Trump made up the difference of three to five percentage points he had been behind in the polls. In future elections, pollsters will have to reexamine their methods and consumers of polls will have to remember to take that grain of salt. 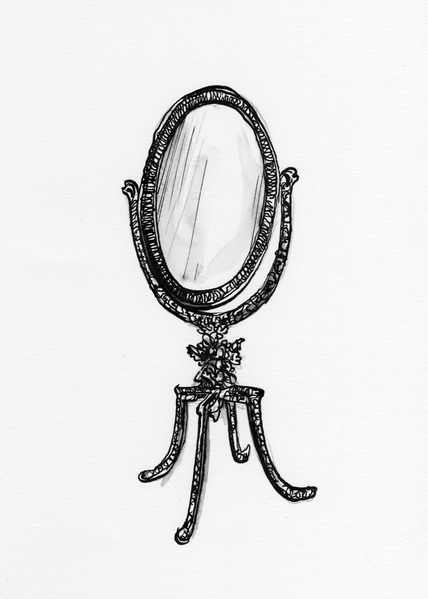 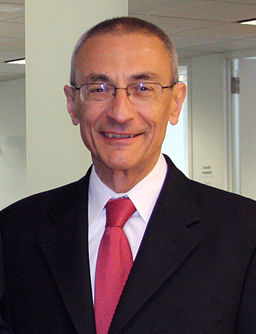 John Podesta in 2010;
photo by Flickr user Connormah
Meanwhile, in the aftermath of the election, the Clinton campaign and the Democratic National Committee are casting blame on everyone but themselves for the debacle of losing to a Republican candidate that few political insiders, not even in the Republican establishment, thought could win. The Democratic establishment, with great hubris and with apparent confirmation from the polls, arrogantly expected their candidate to win in a walk, and to their eventual detriment they didn’t appear to care about courting the votes of working class and middle class people in the Rust Belt. We shall see if John Podesta, chairman of the Clinton campaign, and the rest of his crowd learn anything from this, but in the meantime to help them do so they could use a long, hard look in a mirror if they want to assign blame.
– Techly