September 5, 2021 Isidore Gnome
The plant pathogen genus Phytophthora, a water mold with similarities to a fungus, is a worldwide threat to ornamental and commercially valuable plants due to how it can develop undetected in the early stages of an infestation. While there are some species of Phytophthora that begin an infestation on the above ground portion of a plant, a much larger portion of the approximately 170 known species of the pathogen start out destroying a plant from within its roots. Phytophthora moves upward from the roots through the water channels of the plant, interfering with the plant’s ability to absorb water as it goes. The effect makes the plant appear drought-stricken, which is essentially the case.
One of the plants heavily afflicted by Phytophthora in the past 30 plus years has been the cocoa tree, Theobroma cacao, and specifically the cocoa trees planted in western Africa, where most of the world’s cocoa beans are produced. The species of Phytophthora doing the most damage in that period has been Phytophthora megakarya, a disease that blackens the pods which contain the cocoa beans, rendering most of them unfit for consumption. This disease and a virus transmitted by mealybugs called cacao swollen shoot virus (CSSV) in combination have decimated cocoa tree plantations in western Africa in recent decades. 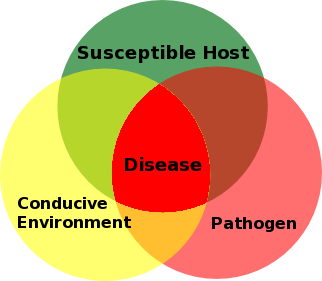 A Venn diagram showing the combination necessary for disease to form. This can apply to humans and animals as well as to plants. Illustration by Earlycj5.
Phytophthora megakarya was introduced from the Americas, where it had long co-existed with the native cocoa trees. The cultivated cocoa trees of western Africa had developed for generations without having to cope with infestations from megakarya, though they had long been contending with Phytophthora palmivora, a less devastating disease for them.

CSSV was native to the forest trees of western Africa, where it did little damage because of long term co-evolution of the trees with the virus. The introduced cocoa trees had no inherited defense against CSSV, resulting in afflicted cocoa trees losing vigor and dying within a few years. Meanwhile, the ants that farmed the mealybugs for their sugary secretions have ensured they continue to live safe from predators by guarding them, even building shelters for them.

Chocolate has grown steadily more expensive, at a rate beyond ordinary inflation, due primarily to shortages of cocoa beans caused by these pathogens. Another reason for chocolate price increases has been related to the salutary shift away from indentured labor on cocoa plantations, making the price more accurately reflect the true cost of production. The cost of production is bound to catch up with any resource as nature asserts itself in one way or another, or in many ways, and imagining that we are immune or insulated from the effects of that assertion is mere hubris and folly. Ultimately, we will pay the price.
— Izzy