September 28, 2018 Techly DoRight
Ten or more years ago there was some hope among rural internet users that a service called Broadband over Power Lines (BPL) would come along soon to save the day by bringing them high speed internet at affordable prices. Not any more. American Telephone and Telegraph (AT&T) has a program in trials in Georgia that is a last grasp at trying to make the technology feasible without all the stumbling blocks encountered by other companies in earlier efforts. If AT&T’s engineers are successful, BPL may at last be rolling out on a large scale in the next five years.

Because internet service is a two way street, downloading data from a provider to a user and uploading data from a user to a provider, getting reliable, high speed internet to people in the countryside has been more complicated than the similar situation of stringing electrical service to those people in the middle of the last century. Satellite internet service is an option in the countryside, but is limited by slow upload speeds since consumers for good reason are not allowed by government regulation to possess enormously powerful transmitters. Satellite service providers also throttle their customers’ usage at certain limits because there is limited bandwidth available on a satellite. 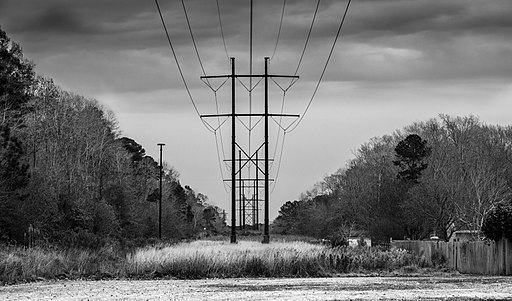 Linear perspective of 230 kV power lines during blue hour in the Castleton part of Virginia Beach, Virginia. Photo by PumpkinSky.
Point to point microwave service has been an option for people living in or near small towns. It has been a rarely used option, however, because state and local laws passed at the behest of large internet providers hinder the ability of local governments to coordinate with small internet providers in setting up microwave service, which is most often undertaken as a public/private partnership. Cable television and landline telephone companies, where they have strung lines for internet service the last country mile, usually charge high rates on account of their monopoly status, with indifferent customer service also reflecting their status as an only option.
The last option left for some country people has been mobile telephone internet service. There are numerous problems associated with reliance on cellular internet service, from the possibility of poor signal to the certainty of data caps and high costs. It’s certainly not the best choice for regularly streaming video or trying to run an internet dependent business. The next generation of wireless data technology, 5G, will be available within the next few years, but it’s questionable whether it will solve the problems mentioned above. When a customer does have a solid connection to 5G service, it will be lightning fast.

The possibility of BPL had always seemed like a Godsend for rural internet users because it would have made connecting to broadband service as easy as plugging a modem into an electrical outlet, and because power lines have high capacity there would have been no need for data caps. The prices would have been relatively low by industry standards because the infrastructure was largely already in place, and because utility companies were more highly regulated than cable and telephone companies. “Would have been” is unfortunately where BPL will have to float in limbo, never to be a real option unless AT&T or some other technology company can resurrect it and make it viable.
— Techly