August 20, 2017 Techly DoRight
In the 1965 comedy film The Great Race, loosely based on a 1908 race around the world, the lead characters drive racing versions of gasoline powered internal combustion engines. That the earliest cars used gasoline would seem to be without question considering how things developed through the rest of the twentieth century. It comes as something of a surprise then to learn that electric cars were quite popular in the early years of motor vehicle development, and it was an electric car that won the first closed circuit automobile race in the United States, in 1896.

Halfway in their race around the world, the characters portrayed by Jack Lemmon, Peter Falk, Tony Curtis, and Natalie Wood are marooned on a melting ice floe in the Bering Strait. Though certainly unintentional in 1965 when the film was made, there is some irony to their situation given the perspective of today’s warming climate.

As anyone can tell, electric cars all but disappeared until recently, as infrastructure and cost improved for gasoline engines in the early twentieth century, overtaking the electric option by 1920. The price of oil went down, giving a boost to the market for gasoline engines, while the crude state of battery technology limited the appeal of electric cars. Environmental impacts were not even a factor in the equation for most consumers or manufacturers until late in the twentieth century. Even then, the initial assessments of the impact of vehicular pollution was limited to local problems such as smog. It wasn’t until the last decades of the twentieth century that at first scientists, and then the public, looked at the larger impact of tailpipe emissions on the global climate.

Now, in the early twenty-first century, after some halting steps by manufacturers to reintroduce electric cars, it appears they are gaining in popularity, particularly in places like China which face deadly levels of air pollution. Battery technology, the Achilles heel of electric cars, has made great strides lately. A question that doesn’t crop up often enough, however, is whether electric cars are as environmentally friendly as the manufacturers would have the public believe they are. In many cases, electric cars still run on power generated by burning fossil fuels, it’s just that they give an illusion of green running because they’re not emitting noxious fumes. The noxious fumes are instead displaced to a coal or natural gas fired power plant more or less many miles away. Out of sight, out of mind. 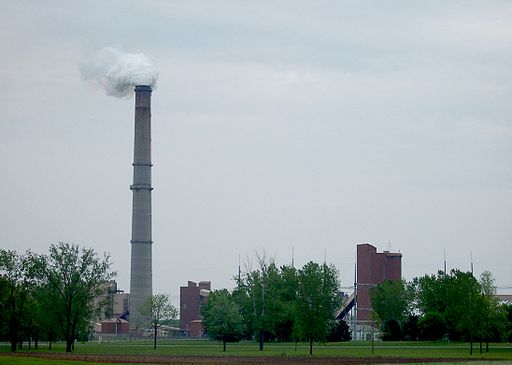 The coal fired Kintigh Generating Station in Somerset, New York, in 2007; photo by Matthew D. Wilson.
The batteries in electric cars don’t present as big a problem from an environmental standpoint as they used to, now that up to 98 percent of the materials are recycled. To make an electric car run truly green, the power source used to charge its batteries needs to come from renewable generators like wind and solar. Since most air pollution comes from gasoline internal combustion engine exhausts, it stands to reason that a major switch over to electrically powered vehicles running on renewable energy will make the single greatest impact on reducing air pollution, and with it the particulates and gases that are contributing to global warming.

Organizations like NASCAR and Formula One racing could do their part in flipping the switch by turning all or part of their circuits over to electric cars. Besides being a spectator sport, car racing has always served as a proving ground for manufacturers. The big racing organizations are still clinging to the old technology, which may be popular with fans who enjoy the noise and familiar smells produced by internal combustion engines, characteristics evocative by long association with high horsepower. To continue glorifying this outmoded technology means that well-known racing organizations have abandoned any meaningful proving ground aspect of their sport for the sake of pleasing the crowd with loud noise, fumes, and ludicrously low miles per gallon of fuel efficiency. Never mind tomorrow, they’re living for today, come what may. 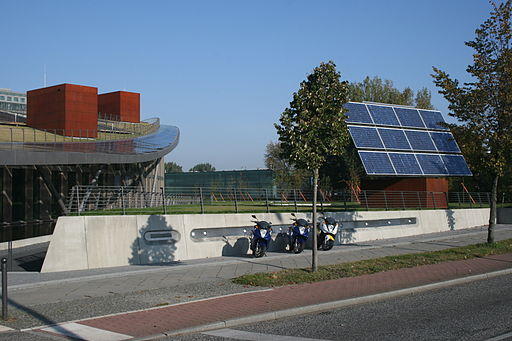 Younicos Solar Filling Station at Solon SE Headquarters in Berlin, Germany in 2009; photo by Busso V. Bismarck.
Newer racing organizations are stepping forward with their own electric car circuits. As drivers test and prove the newer technology on the race track, manufacturers should be able to improve efficiency of the batteries and perhaps drop the price of consumer models to be on a par with, or even cheaper than, comparably equipped gasoline powered cars. When that happens, electric cars will start to overtake the old technology, the same way they were overtaken in their earliest form by the internal combustion engine in the early twentieth century.
The crucial piece of the puzzle needed to solve pollution problems comes from the power generating source, not the cars. That may happen on a more individual level than on a corporate or government level, as people will find it convenient to do most of their car charging at home, where they can be assured of a cleaner source by installing their own solar panels or wind turbines. Waiting for government to promote the necessary infrastructure changes to ensure cleaner power generation will not push improvements in transportation, decrease pollution, and ultimately limit the effects of global warming, not with the government currently in power.
― Techly