There Are No Easy Answers

May 19, 2019 Vita Historia
Today is the 30th anniversary of the release of Spike Lee’s 1989 film Do the Right Thing, first shown at the Cannes Film Festival in France. May 19 is also the birth date of Malcolm X, whose posthumous influence on the film Mr. Lee acknowledges with a quote from him at the end, along with a quote from Martin Luther King Jr.. The quotes are about non-violent resistance to oppression (the Rev. King) and the occasional need for violence in self defense against oppressors (Malcolm X). As throughout the rest of the movie, Mr. Lee makes no judgements, but merely puts those ideas out there for the audience to consider. Do the Right Thing provokes thought; it does not provide answers, and 30 years later the state of race relations in America has hardly budged from what Mr. Lee portrayed in the film.
The film did not win the highest prize at Cannes, the Palme d’Or, though it was nominated. It was not nominated for Best Picture at the Oscars, and the film that won the honor for 1989 was Driving Miss Daisy, a good film about race relations but a safe one for Hollywood, and a film that in the years since has receded in importance in the rear view mirror. Nearly 30 years later, Spike Lee’s film BlacKkKlansman was nominated for Best Picture at the Oscars but lost to another safe film about race relations, Green Book. Both Driving Miss Daisy and Green Book are films produced by largely white filmmakers for consumption by a largely white audience, and are meant to comfort white liberals without unduly upsetting white conservatives. That each received Hollywood’s highest honor is a testament to the institution’s eagerness to pat itself on the back for occasionally making a social message movie without rocking too many boats. 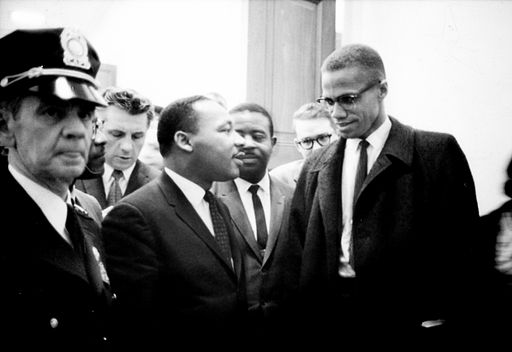 Martin Luther King Jr. and Malcolm X waiting for a press conference to begin in March 1964. Photo by Marion S. Trikosko for U.S. News & World Report, now in a collection at the Library of Congress.
What’s missing in that equation, of course, are African-Americans. In contrast, Spike Lee has made films for everybody, and Do the Right Thing was groundbreaking in that respect. All the characters he portrays are well rounded, with good and bad aspects to all of them. As the late film critic Roger Ebert noted, there are no heroes or villains that we can easily hang labels on. Those portrayals are more true to life than the safe, near-stereotypes portrayed in Driving Miss Daisy and Green Book. The complexity can also leave some viewers uneasy, since they desire the satisfaction of stories that follow a familiar arc leading to either a comforting conclusion or one that at least ties up some loose ends of the story. Do the Right Thing provides none of that. It is a wonder a major Hollywood studio, Universal, backed the film financially and distributed it widely. That it was popular with the public and, eventually, with most critics despite its unconventionality in style and substance is a testament to how well crafted it was by Mr. Lee and his cast and crew.

Ossie Davis as Da Mayor has a confrontation with some youths on the street in Do the Right Thing. Warning: foul language.

30 years later Do the Right Thing stays with people who view it now for the first time as much as it did with people who saw it then, prompting the same questions in their minds. A few years before Mr. Lee made the film, there was the racially charged incident at Howard Beach in the New York City borough of Queens, an incident which informed the events in Do the Right Thing. Two years after the movie came out, there was the police beating of Rodney King in Los Angeles, and despite the incident being filmed by a bystander, showing the excessive use of force by the police, the cops were subsequently cleared in court, leading to riots in black neighborhoods. There has been no end of ugly, often fatal, incidents in America like those portrayed in the movie, and they just keep coming, like waves pounding the shore. The observations Spike Lee made in Do the Right Thing about race relations in America are still relevant today; the question remains – is anybody listening well enough to change things?
— Vita

“I just want to say – you know – can we all get along? Can we, can we get along? Can we stop making it horrible for the older people and the kids?”
— Rodney King, speaking on television in relation to the riots in Los Angeles on May 1, 1992, after a jury acquitted the police who beat him the year before.