October 14, 2018 Isidore Gnome
The expansive, pastoral cemeteries we are familiar with today came into being in the nineteenth century when municipal officials dedicated large amounts of land in the suburbs or just outside cities to landscaped burial grounds. Church graveyards within city limits had become overcrowded, prompting worries about public health and the integrity of nearby building foundations. The rural cemetery movement took its cues from English garden design of the eighteenth century, with vast expanses of mowed grass broken up trees and shrubbery, and taking advantage of vistas where possible. Since there were no public parks when these new cemeteries were designed and built, they soon functioned as parks at a time when enjoyment of the outdoors was more restrained and dignified than it is today. No one in Victorian times was jogging past the gravestones in shorts and very little else.
Those Victorian era rural cemeteries became part of the suburbs and then eventually were swallowed up by their city when urban growth expanded to encompass them. They can still be islands for quiet contemplation within a city if they are large enough for visitors to get away from the noise and bustle of surrounding streets. Their park function has been usurped by purpose built parks that allow a greater range of activities, such as jogging or playing softball. No worries there about disrespect for the dead. Since the fine old garden cemeteries of the nineteenth century have become incorporated within cities their boundaries have been limited and now they are either full or nearly full of permanent guests. 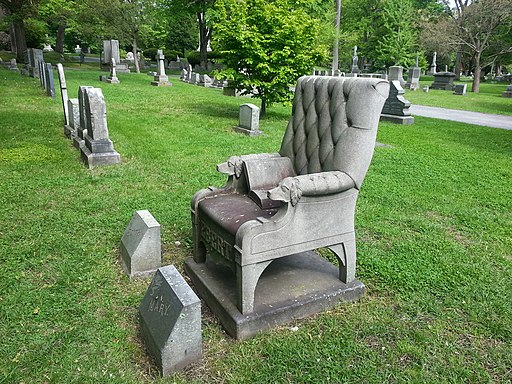 A monument at Lowell Cemetery in Lowell, Masachusetts. Photo by Bernie Ongewe.
The serenity invoked by well tended grounds and beautiful vistas is of course for the living, not the dead, who presumably are beyond caring. The same can be said for the fine caskets and embalming services offered by funeral parlors at a fine price to the lately bereaved. Nothing but the best for the dearly departed, and by extension to the social standing of those paying for it all. Cremation offers one way out of some of the unnecessary expenses and fuss of burial in a recognized cemetery. Where people have space available at home, a family plot is often outlawed by zoning regulations, and anyway the new custom of moving from one house to another several times throughout life makes it impractical. House buyers are understandably queasy about moving into a place with a stranger’s recently interred relatives just outside the back door.

The Loved One, a 1965 film based on a satirical novel by Evelyn Waugh, was directed by Tony Richardson and in this scene starred Robert Morse affecting an English accent as Dennis Barlow, who must see to the burial of his uncle while on a trip to Los Angeles, California. Liberace played Mr. Starker and Anjanette Comer played Miss Thanatogenos, both of the fictional Whispering Glades cemetery and mortuary.

There is another option, one that chucks all the trappings of the funeral industry and the land grabbing of permanent cemeteries, and that is natural burial. The dead are not embalmed nor are they buried in monstrously expensive containers that prevent or delay decomposition of the corpse and casket. The dead are buried in a cloth shroud or a simple wooden coffin which will decompose readily without contaminating the soil. Grave markers are not permanent reminders such as the headstones found at a conventional cemetery, but low key natural markers meant to degrade within a generation, or plantings such as a tree which will eventually supersede its function as a mere grave marker. The land is conserved as wild space rather than subject to continuous environmental destruction by modern landscaping practices.

Natural burial is a return to the practices of our ancestors. In some parts of the world, people have never deviated from natural burial practices. Returning to dust is inevitable, and it might as well happen in a way that preserves the economic and environmental resources of the living. Memories of the departed can be kept alive in ways other than the permanent reminders of headstones and the expensive and often environmentally destructive tending of a cemetery landscape designed to appear natural, though upon reflection it is hardly that at all, any more than the neatly clipped lawns in the suburban and city lots surrounding it.
— Izzy