Too Hot for School

August 19, 2018 Vita Historia
There never was any truth to the notion that schools closed in the summer so that farm children could help out with chores at home, and the real reason had to do with urban schools having low attendance in the summer and teachers and administrators wanting a summer break to escape city heat in the days before air conditioning, as well as using the extended break to pursue avocations or take temporary jobs. Farm children were needed at home in the spring for planting, and then again in the fall for the harvest. While it’s true farm work never slacks off entirely, particularly when animal husbandry is involved, there still were lulls in the summer and in the winter when children could attend school. Through most of the nineteenth century, a short school year was sufficient for farm children who had no ambitions in learning beyond the sixth or eighth grade. Farm children who had greater ambitions resorted to supplementing their learning on their own when they could, much like what we know about how Abraham Lincoln learned to become a lawyer.
The modern summer break came about instead from the needs of urban school administrators and the upper and middle economic class students and their families who supported many of the schools. The needs of poor students and their families, as always, hardly entered into the concerns of the rest of society. Before school attendance became compulsory in the late nineteenth century, urban schools were open year round, but often were only half full, and even less than that in the summer. School administrators eventually came around to following the model of colleges by closing for the summer so that students and teachers could pursue other interests outside the baking cities, leaving behind only enough staff to help students who needed to take extra courses of learning during the break. Public health officials added their approval to emptying out the schools in summer because they deemed the hothouse conditions unhealthful in general, and not conducive to learning in particular. By the early twentieth century school administrators had generally adopted the summer break, which started in late May or early June, and ended in late August or early September. 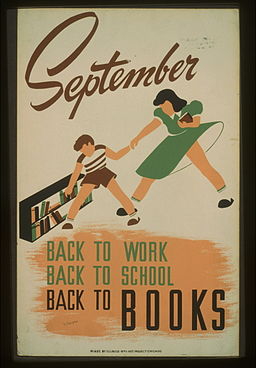 A 1940 Works Progress Administration (WPA) poster promoting reading and library use upon returning to school in September after the summer break.
The system appeared to work well for most of the twentieth century. Rural schools synchronized their schedules with those of their urban counterparts so as not be left behind as it became increasingly clear a high school diploma was the minimum academic achievement necessary in modern society. The tourism industry could count on a steady source of both customers and labor during the two to three month summer break. The American public school system ranked highly among the school systems of other industrialized nations, even with its extended summer break. Then in the late twentieth century alarm bells started sounding about the supposed failings of that highly successful public school systems, the details of which are beyond the scope of this article, and so in effort to increase academic rigor, or at least appear to do so, school boards have been eroding the summer break, largely on the back end. 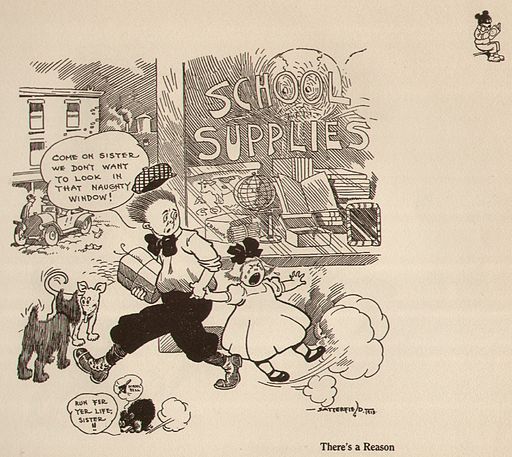 A 1913 “Back to School” cartoon by Bob Satterfield (1875-1958) that captures how most children have always viewed the occasion.
In many school districts, fall semester classes now start in the first weeks of August. School may have ended in mid-June, leaving less than two months for the summer break. And yet still academic achievement appears to be falling, at least among the middle and lower economic classes. That also is another article for another day. For today it is sufficient to point out that the public school system does not exist in isolation from the greater society, and lackluster academic achievement by the students cannot be remedied merely by making them sit at their desks for more days every year.
The problem is in quality, not quantity. The society as a whole is fracturing, and the problems with poor learning begin and end in the home. The long summer break enacted by the twentieth century public school system was an excellent compromise that worked well for nearly everyone except families that had both spouses working outside the home. That presents a difficulty today, too, but the answer is not in charging the public schools with child daycare duties and calling that increased academic rigor. It’s not. August is too hot for school, in air conditioned facilities or not. August is for causing students anxiety about the imminence of schools reopening when they start seeing “Back to School” sale advertisements, which now also draw the attention of their teachers, who too often feel pressed to use their own money to buy supplies for their students. July is too early for a return of that unique schooldays anxiety, especially when schools closed only a few weeks before, in June.
— Vita