The Price of Natural

April 3, 2018 Isidore Gnome
The word “natural” on packaged foods does not mean much anymore since there are no standards to uphold it, unlike the case with “organic” on a label, but one area where consumers have been paying attention and making their preference known over the past 20 years is in the labeling of vanilla extract. A significant enough number of consumers have come to prefer vanilla extracted from real, natural vanilla pods that agribusinesses like Nestlé have switched from synthetic to natural vanilla. Synthetic vanilla is a chemistry laboratory product isolated from compounds in wood pulp or petroleum, and for decades in the latter half of the twentieth century it was the preferred choice of most consumers because it was cheap relative to natural vanilla extract, it’s flavor was at least acceptable, and for the most part consumers were not paying attention and didn’t make a distinction between the synthetically derived product and the natural one.
Food ingredient and nutrition labels provide more information to the consumer now, and more people are becoming label readers. Not all of them may know the provenance of synthetic vanilla extract, but a large segment decided they would prefer the natural stuff, and they voted with their dollars. The result was an increase in demand, something growers, the majority of them in Madagascar, were not prepared for since demand for their product had steadily dwindled for decades and they had cut back production or gotten out of the business altogether. Natural vanilla had always been an expensive spice, typically second only to saffron in price on the world market. Competition from synthetic vanilla producers had depressed prices, however, and combined with the drop in demand many farmers saw little profit in the lean decades. 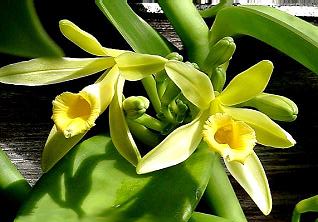 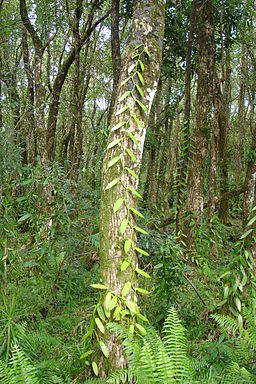 Vanilla planifolia vine growing up a tree on a plantation on the island of Réunion, which is east of Madagascar in the Indian Ocean, and is a major producer of natural vanilla. Photo by David Monniaux.
The rather sudden spike in demand for natural vanilla in the past 20 years caused a scramble to reinvest in production, a process which lagged behind demand by as much as five years because of the the time and labor involved in growing and processing marketable vanilla pods. The type of vanilla most popular around the world is Vanilla planifolia, a climbing vine orchid native to Mexico and Central America. Oddly, even though the plant is native to Mexico, and Mexico continues as a big producer of natural vanilla, the place that grows the vanilla most people prefer is Madagascar, an island off the southeast coast of Africa. Soil and other environmental factors must play a role in the end result, because while the type of vanilla orchid is the same in both parts of the world, consumers express a definite preference based on variations they can detect in taste. At any rate, Madagascar currently produces up to 80% of the world’s natural vanilla.
Vanilla planifolia needs to grow three or more years before it will flower, and then each flower remains open for only one day, at which time in Madagascar it must be hand pollinated because of the lack of resident animal or insect pollinators. In Mexico, there is a species of bee that tends to the vanilla flowers. After pollination, nearly a year passes before the pods containing the seeds develop, and after that there is washing, sun curing, sorting, and other handling that goes into producing the dried black pods which have the tiny, flavorful seeds that are the ultimate object of all this careful tending. The labor intensiveness of producing natural vanilla, added to the time involved, drives its price up. It would be a mistake, though, to think individual laborers are well-paid for their work on such an expensive agricultural product; as always, it is typically the people in the middle, the traders, who reap the greatest rewards. 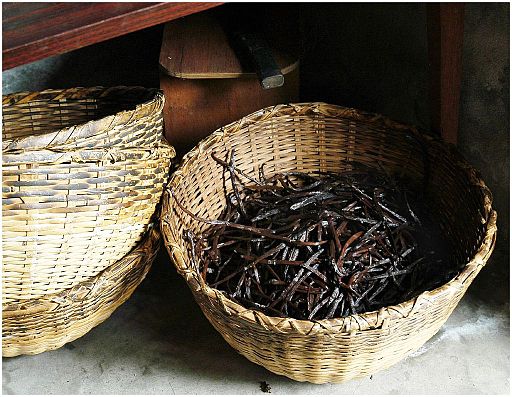 Dried, cured vanilla pods in a basket on the island of Réunion. Photo by tirados joselito.
A year ago in March, a cyclone made landfall on Madagascar with the force of a category four hurricane. Dozens of people were killed, and it was feared damage to the vanilla crop would worsen the worldwide shortage which had driven prices up to a record $600 per kilogram (2.2 pounds) in 2017. The most recent low point in the price was 2002, when dried vanilla pods sold for $20 per kilogram. That’s the price for the agricultural product, of course, not the price after it has been further processed into the vanilla extract available to consumers at supermarkets. It turned out damage to the vanilla crop in Madagascar was not as bad as commodity brokers originally expected.

The opening of the 1984 David Lynch film Dune, with Virginia Madsen as Princess Irulan.

Still, for individual consumers living in cool climates outside the natural growing range of Vanilla planifolia, hedging against a volatile, expensive world market for natural vanilla, with too many of its bets placed on the crop in one place, Madagascar, hedging against all that by growing this orchid in a pot by a windowsill may be a bit of a stretch, considering the advice of some growers who say the plant needs to grow more than ten feet before it will produce flowers, and even then there’s no guarantee of getting pods that will yield recognizably tasty vanilla seeds. It might be a better bet to buy a lot when the market is low, or in other words, hoard it. Vanilla extract always contains a hefty percentage of alcohol, after all, as people who are apt to sneak a drink now and then have always known, and the alcohol is an excellent, natural preservative.
— Izzy