Not a Piece of Cake

July 9, 2017 Editor
“All politics is local.” ― An old saying, most famously uttered by former Speaker of the House, Thomas P. “Tip” O’Neill

This fall the Supreme Court will hear the case of Gill v. Whitford, a partisan gerrymandering case from Wisconsin, where redistricting lines drawn up by Republicans in the state legislature in 2011 after the 2010 census resulted in grossly unbalanced election results, such as in the 2012 election when, despite a majority of the votes statewide going to Democrats, Republicans nonetheless won sixty of the ninety-nine State Assembly seats. While the case is specifically about the redistricting lines drawn for state elections, there are implications for national elections because state legislatures also draw the lines for federal congressional districts. National election results have similarly tilted toward Republicans winning more seats in the House of Representatives than simple vote tallies warrant, and Democrats typically gain fewer seats than vote totals should grant them. 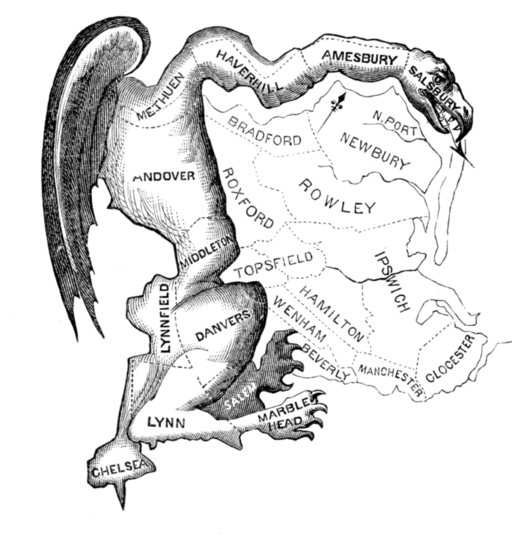 “The Gerry-Mander”, a political cartoon by Elkanah Tisdale (1771-1835), published in the Boston Centinel in 1812. The district depicted in the cartoon was created by the Massachusetts legislature to favor the incumbent Democratic-Republican party candidates sponsored by Governor Elbridge Gerry over the Federalists.
Gerrymandering has been around since the founding of the Republic, ever since Article 1, Section 2 of the Constitution specified that the states had the power to apportion congressional districts based on census results every ten years. There’s nothing in there about how the states should draw the lines, though the 14th Amendment, adopted 149 years ago on July 9, 1868, set guidelines for citizenship and equal protection under the laws for all citizens, and that has been invoked by the Supreme Court to overrule racially motivated gerrymandering. State legislatures have nevertheless taken the broad leeway left in Article 1, Section 2, and run with it, with both parties divvying up the cake as they liked if they had enough votes from their own members to push new district lines onto the books. Once one party or the other established districts in their favor, subsequent elections had the effect of consolidating their power.
There have been partisan gerrymandering cases brought before the Supreme Court in the past, but the Court has always been reluctant to step into what it has deemed politics as usual, and their rulings have always been narrow enough to have little effect on the practice of partisan gerrymandering. The Court has been more willing to rule broadly against racial gerrymandering by applying the equal protection principles of the 14th Amendment. It’s hard to see the ultimate ruling in Gill v. Whitford deviating from past rulings unless one or more of the conservative justices rule against the State of Wisconsin, and by extension the Republican party. The Court is currently split 5-4 along party lines, with Republicans in the majority.

This gerrymandering case is a reminder of how failure to pay attention to state and local politics can result in a minority party exercising disproportional power. There are more important elections than the presidential one every four years. The party that turns people out for local school board elections, for city council elections, and for state legislature elections every year, year after year, is the party that ultimately takes power in the national elections. Those seemingly insignificant elections lay the groundwork and set the rules for what follows on a grander scale.

Motivated people turn out for elections, and Republicans have done a much better job over the past thirty or more years of motivating their people than Democrats have done with their people. They have done so with with some dubious tactics, it’s true, mainly motivating people through fear and loathing of The Other, whoever or whatever that might prove effective at the moment. That was easily seen in the 2016 election.

On a national scale, where state boundaries do not change, the Electoral College has worked to gerrymander the presidential election result on behalf of the Republican candidate as Democrats lose strength in the small towns and countryside of the middle of the country. For instance California, the most populous state in the nation, and one with a strong Democratic party majority, has 55 electoral votes (53 congressional districts plus 2 Senate seats) to offer the Democratic presidential candidate whether that candidate wins the state with a simple majority of one vote or an overwhelming majority of three million votes.

This is from a network television appearance by George Carlin in the early 1990s. No foul language warning necessary.

In the language of gerrymandering, Democrats are effectively “packed” into California and other highly urban states, mostly on either coast. Getting rid of the Electoral College and deciding the presidential election with a simple nationwide majority vote would eliminate this gerrymandering effect, but with Republicans controlling the Presidency, the Senate, the House of Representatives, the Supreme Court, 33 out of 50 governors’ offices, 31 out of 50 state houses, and 37 out of 50 state senates, that won’t be easy. 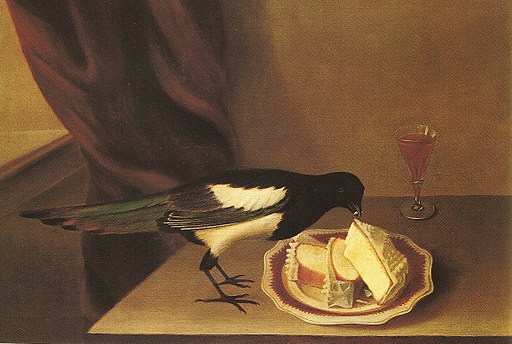 Magpie Eating Cake, an 1865 painting by Rubens Peale (1784-1865).
It would take working from the grass roots on up instead of snoozing until 2020 and dreaming the current Republican president will be impeached along the way. It would also mean holding the Democratic party establishment to account for selling out the middle and working classes while they chased after financial and professional elites. Since the Democratic party establishment has shown no inclination to change in response to the 2016 election debacle, however, it appears the best course in the years ahead will be to discard the Democratic party apparatus altogether and form an entirely new major party. It’s not like that has never been done before.
― Ed.