The nonprofit organization Fight for the Future has set up a website called Comcastroturf which allows people to check if their name has been used surreptitiously to file anti net neutrality comments with the Federal Communications Commission (FCC). The FCC had recently opened up a public comment period in anticipation of rolling back net neutrality regulations, and within a short time they were inundated with anti net neutrality comments which appeared to be generated by Internet Service Provider (ISP) astroturfers from hijacked subscriber lists. Comcast threatened Fight for the Future with a lawsuit, from which they have since backed down after it appeared obvious even to them that it was a tone deaf public relations debacle. They blamed the company they outsource their brand defenses to for excessive vigilance. 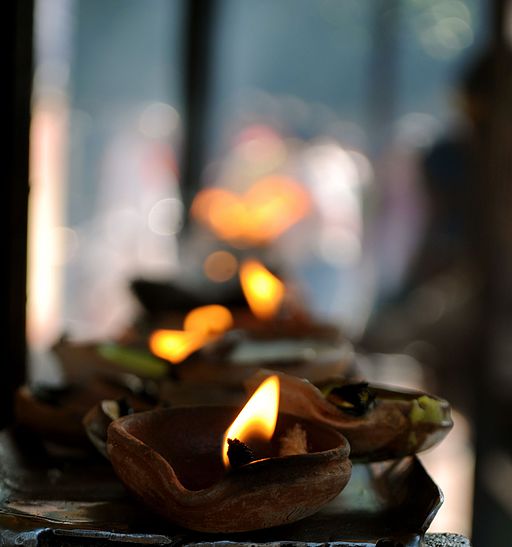 Let there be light; photo by Flickr user Arup Malakar, taken in the Kamakhya Temple, a shakti temple on the Nilachal Hill in the western part of Guwahati city in Assam, India.
It’s clear from new FCC Chairman Ajit Pai’s remarks on net neutrality that he does not support the FCC net neutrality regulations adopted in 2015. Since the rest of the now Republican controlled board of commissioners will most likely go along with him when they vote on the regulations in September, the public comment period appears to be a mere formality. That apparently hasn’t deterred the ISP industry from feeling the need to generate a phony campaign to support the anti net neutrality commissioners. Perhaps they were concerned about the pro net neutrality campaign of John Oliver. Now Comcast and other industry giants have egg on their faces, and Chairman Pai has not escaped squeaky clean either, as he has declined to question the validity of the astroturfed comments, while distracting the attention of the public by complaining about mean tweets.
There are customers of Comcast who complain endlessly about the company’s high prices and lackluster, even adversarial, customer service, yet those customers do little or nothing to explore alternatives to Comcast. They sit grumbling in the dark and won’t lift a finger to light a candle. Such people do a disservice to themselves, but since they seem to be satisfied with that in a masochistic way, the rest of us are left having to listen to their grousing while they do nothing to improve their situation. That shouldn’t be a problem for those of us who can get out of earshot, though in the broader perspective it is those dissatisfied but immovable customers of Comcast who grant the company its monopolistic power in the marketplace, and that’s a problem for everyone because it limits affordable options as smaller companies struggle to establish themselves when confronting the obstacles thrown at them by industry giants and the legislators and regulators they have in their pockets.
Comcast and companies like it might behave better if they started experiencing mass defections. Comcast has been losing subscription television customers, while increasing broadband customers. Cord cutting does not affect Comcast’s bottom line if the customers doing so are merely moving their dollars from one part of the service to another. City dwellers and suburbanites have more options for internet service than people in the countryside, and so they have fewer excuses for continuing with Comcast even while they dislike the company intensely. Ultimately the choice comes down to a decision about what to give up, at least in the short term. Even without streaming video, life goes on. For the majority of the Earth’s inhabitants, the whining of some Americans about how to get along without access to each and every National Football League (NFL) game over either the internet or subscription TV, or the latest “must see” TV series, must appear ingloriously obtuse and selfish. These companies have too much power because we have given it to them. It’s like being abused in a relationship and not working to free yourself because you can’t imagine life any other way. Who knows, life untethered from the Comcast umbilical cord could be better than you think.
― Techly