How Green Was My Astroturfing

May 19, 2017 Techly DoRight
The Federal Communications Commission (FCC) net neutrality rulings of 2015 are under attack from – surprise, surprise! – Ajit Pai, the former attorney for Verizon and new FCC chairman. Mr. Pai calls the rollback of Title II regulations “Restoring Internet Freedom”. It’s clear Mr. Pai has read and understood his Orwell. Part of the niceties involved in rolling back the Internet Service Provider (ISP) common carrier regulations of Title II that Mr. Pai and his Republican allies in Congress and the White House want to have happen are invitations for public comment on the FCC website. It turns out, however, that when the FCC isn’t complaining about John Oliver inciting his viewers to inundate the FCC website with comments in support of Title II, they are ignoring the questionable origin of comments against Title II from citizens whose identity may have been hijacked by the very companies they pay for monthly internet service, companies like Comcast, Verizon, and AT&T.
Astroturfing is nothing new in politics, but to ignore the obvious signs of astroturfing in a letter writing or email campaign to government regulators or congresspeople signifies a set agenda that is not to be swayed by emails or letters of varying opinions. The fix is in, in other words. It’s clear from FCC Chairman Pai’s previous public comments what his opinion is on Title II and net neutrality, and now that the FCC board has a Republican majority, his opinion is likely to become policy. It is hypocrisy then for the FCC to invite public comment and ignore for whatever reason the comments it’s board doesn’t want to hear, even though they are genuine, while accepting the clearly astroturfed comments originating from industry insiders. 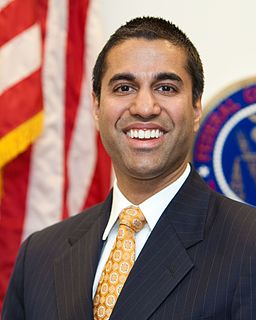 Ajit V. Pai, new Chairman of the FCC.
Lewis Black in a concert in Amsterdam, The Netherlands, after the 2008 financial meltdown, comments on capitalism, greed, and how the United States government handled the crisis. In the end, there were no repercussions to the wealthy for the damage they inflicted on the working and middle class people who pay their way year after year. Warning: foul language.


Chairman Pai has remarked that in the 90 day public comment process, the FCC will not ” rely on hyberbolic statements about the end of the internet as we know it, and 140-character argle-bargle, but rather on the data.” Presumably the FCC chairman will then be ignoring the considerable amount of 140 character argle-bargle generated by his boss, the Argle-Bargler-in-Chief. Would that it were so. The reality is that the new FCC Chairman and the new President and the new Republican Congress appear to be in perfect agreement on rolling back Title II common carrier regulations for ISPs, and there’s little that ordinary citizens can do to stop them. Try John Oliver’s solution or the one from the Electronic Frontier Foundation (EFF), and good luck to you, but in the future pay attention at the ballot box once every two to four years, and every day remember not to buy into the “fruit from your tree” delusion.
― Techly