May 21, 2017 Isidore Gnome
Following on the heels of the news story about Internet Service Providers (ISPs) astroturfing the Federal Communications Commission (FCC) to influence its decision on rolling back net neutrality regulations, and in some cases preceding it by several years, is the revelation that Monsanto, makers of Roundup herbicide and a world leader in producing genetically modified seeds, has allegedly been paying shills to post positive comments online about the company and its products, particularly on websites which portray them negatively. Even more disturbing has been the information from internal company memos which reveal its strategy for tilting scientific opinion in its favor by funding biased think tanks, funneling grant money to friendly scientists and academic institutions and even ghost writing papers for them, all of which are meant to appear as impartial efforts, while debunking contrary news articles and impugning the motives of the journalists who write them. Monsanto refers to its policy as “Let Nothing Go”. 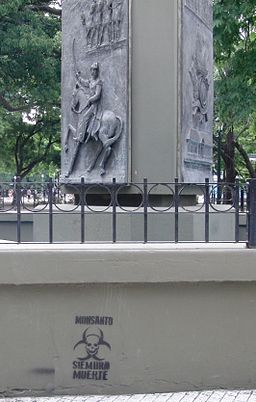 Anti-Monsanto stencil “Monsanto – Siembra Muerte” in Buenos Aires, Argentina, in 2013 reads in English “Monsanto – Seeds of Death”; photo by JanManu. Monsanto’s policies and practices have engendered large scale protests in Argentina, as well as elsewhere around the world. Strangely, in the United States, the land where Freedom of the Press is enshrined in the First Amendment to the Constitution, the mainstream media is largely silent about agribusiness misconduct. Test that yourself with an internet search.
Monsanto is not alone among companies in tasking their public relations people with promoting a positive image online in comments sections, forums, and social media. That’s a very good reason for taking such comments with a large grain of salt. It’s akin to what you may hear around the water cooler at work, only in this case one or more of your fellow gossips makes oddly stilted remarks in favor of the company way, as if speaking from a script. When one of those gossips dons a white laboratory coat and purports to speak with scientific authority on the subject at hand, the discussion moves magically from around the water cooler to around the executive conference table. There the discussion is not so much about influencing public opinion as it is about setting the parameters for debate and ultimately public policy.

Robert Morse learns under the tutelage of mail room boss Sammy Smith as they sing “The Company Way” in the 1967 movie of How to Succeed in Business Without Really Trying.

However, just because a shill wears a lab coat and has a list of academic degrees behind his or her name does not make that person any less of a shill than the one who makes a few dollars trolling comments sections on behalf of a corporation. The scientific high priest type of shill is morally worse because he or she exploits the respect and gullibility of the general public when hearing pronouncements from them. Not all of the science shills know what they do, of course, because they may be true believers. The others, who know what they do, but go on anyway because of greed and ambition, deserve no leeway from the public or their peers, and more likely deserve condemnation. Jesus knew as much when He denounced the Pharisees.

A scene from the 1970 movie Little Big Man, with Dustin Hoffman and Martin Balsam. Snake Oil Salesmen and their Shills by no means disappeared with the 19th Century.

For whatever topic you care to name that puts at risk the finances of large corporations – tobacco, climate change, Genetically Modified Organisms (GMOs) and the herbicides that accompany them – you can find a corporate funded think tank with outreach to a handful of friendly scientists and institutions who scramble to debunk legitimate research and hold back a growing avalanche of negative public opinion. The agribusiness funded Genetic Literacy Project has nothing good to say about U.S. Right to Know, an organization largely funded by the organic food industry. Similarly, U.S. Right to Know dismisses the science of the Genetic Literacy Project. The organic food industry in the United States has about 5% of the market and is steadily growing year after year. Organic foods are by definition non-GMO. You are free to make up your own mind about who to believe, of course, and it’s a good thing then that to help you decide, many sellers of non-GMO foods have begun labeling their products as such. This was after giant agribusinesses successfully lobbied the government to scuttle labeling of products that do contain GMO foods. The big corporations apparently don’t trust you with the facts and with making decisions for yourself based on those facts.
― Izzy