The 1944 film Hail the Conquering Hero, written and directed by Preston Sturges, satirizes our need for heroes and the lengths we will go to in order to assert myth over reality.

People seem to have a deep need for heroes, and will invent mythologies around the ones they anoint and erect monuments to them. If worshiping their hero and fetishizing the symbols around him or her serve as a poke in the eye to some others, well then that’s too bad. Those in power decide who gets a monument, and the powerless have to live with it. When some citizens criticize the symbolic nature of those monuments, the powerful react with anger, as if some people have a lot of nerve for objecting to getting poked in the eye.

All around the former Confederate States of America, civic arguments are going on over the proper role of Civil War symbols and monuments in public places. Almost all of these symbols and monuments are martial in nature, with an undertone of defiance. For some, the War Between the States continues, 150 years on, and those whose eyes are poked because of it need to remember their place. One wonders how they would feel if a statue of William Tecumseh Sherman was put on prominent display in Peachtree Plaza in Atlanta, Georgia. How about a statue of the English King George III in New York City’s Central Park? Since at least a third of residents of the American colonies were Loyalists during the Revolution, that war can be considered the first American Civil War, or War Between the Revolutionists and the Loyalists, if you prefer. 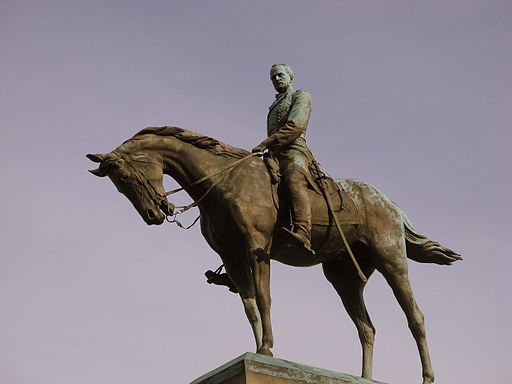 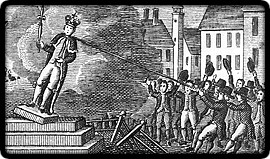 New York City. After a public reading of the Declaration of Independence on July 9, 1776, a crowd pulls down the statue of King George III to be melted into bullets. Contemporary engraving.

The Civil War monuments should not be removed, as that would silence part of history, like the activists who want to silence speech they don’t agree with. A better policy is to acknowledge and memorialize those other people from history, the ones who have been ignored while the powerful played up the mixed accomplishments of generals and statesmen. In Charlottesville, Virginia, where one of those civic debates is going on about the desire of some to see statues of Robert E. Lee and Thomas “Stonewall” Jackson removed from public parks, the former head of the local chapter of the National Association for the Advancement of Colored People (NAACP) in the 1950s, Eugene Williams, believes the statues should stay, but the city should also memorialize the slave auction site at Court Square. Auctioning slaves within sight of the seat of justice, the local courthouse, is a stark reminder of the contradictions in our culture, and memorializing both the auction block and Generals Lee and Jackson on their horses would yield a more complex, adult understanding of history than listening to only one side of the story.
― Vita