April 9, 2017 Editor
It seems it is human nature to need someone or some group to look down on and cast as the reason for one’s misfortunes. From vilification of Jews and now Muslims, to hatred of black people and now brown people, a lot of folks are always looking for a scapegoat. The rich and powerful know this as well as anyone, and are quick to take advantage of this tendency when it serves to turn away the attention of the masses from the true source of their economic stagnation, which is to say the kleptocracy of the rich and powerful. 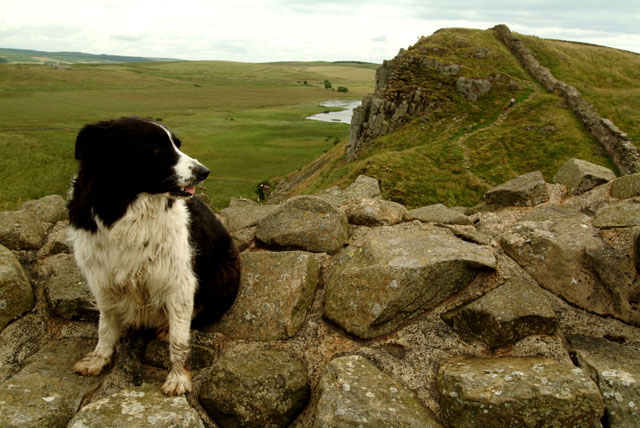 Hadrian’s Wall; photo by Mark Burnett. People have always built walls, with varying degrees of effectiveness. This one was built by the Romans in the reign of the emperor Hadrian on the border of England and Scotland, to keep the Scots out of England. It turns out the Scots had more to fear from the English, just ask any Scot.
While it is no longer acceptable in open civil discourse to rant about the evils of the Jews and the blacks, and that sort of talk has been relegated to private conversations among like-minded peers, feelings of xenophobia and revulsion at The Other have found their outlet in public condemnation of Muslims and brown people as long as it is couched in terms of protection from terrorists or crackdowns on illegal immigration. There is probably just as much racism and visceral need for scapegoats as ever, it’s just that now, at least in public, peddlers of base emotional venting know to use code words and dog whistles. Everyone knows what the peddlers mean, but everyone can maintain deniability, whether plausible or not is a matter left to an individual’s tolerance for hypocrisy.
Regarding illegal immigration specifically, the facts are not as scary as the current administration cynically pretends they are, and there is a decent compromise solution called “permanent non-citizen resident status”, which the political science scholar Peter Skerry explains at length in a 2103 article in National Affairs. It’s interesting to note that since many Hispanic illegal immigrants are young men away from home and family and view their presence in the United States as a temporary employment situation only, they tend to be insular and not always on their best behavior, two characteristics which contribute to a poor view of them by the resident, mostly Anglo population.

The workers were “settlers in fact but sojourners in attitude.” . . . Not surprisingly, such transience is not confined to the workplace. Young people detached from the constraints as well as the supports of families back home exhibit what one sociologist refers to as “instrumental sociability,” characterized by transitory friendships, casual sexual encounters, and excessive drinking to a degree uncommon back home.

― Excerpted from “Splitting the Difference on Illegal Immigration” by Peter Skerry.

The phrase “instrumental sociability”, when referring to Hispanics, can conjure up a tinge of Tortilla Flat stereotyping, but the more accurate similarity in reference is to another subgroup in our culture, the military. The military also is composed of mostly young men who are away from home and family in what they view as a temporary situation, and they maintain an insularity from the community at large where they are based out of what amounts to a mutual, tacit agreement with the locals. The analogy doesn’t go far before breaking down, such as in discussions of the presence or lack of strong leadership and policing within the subgroup, but still it is ironic that many of the people in the larger culture who adulate the military with nearly onanistic devotion are the same ones who most loudly berate brown-skinned “illegals”.

Willie Nelson and Merle Haggard together sang the most famous version of “Pancho and Lefty”, a song written by Townes Van Zandt. Here, at a tribute to Willie Nelson, Rosanne Cash sings a stirring version.

Before people with middle class and higher incomes, with college or higher educations, and with supposedly refined ethics, start congratulating themselves over how they are above looking down on people and scapegoating one group or another, they might reflect on the rhetoric following the 2016 presidential election when people just like them, and perhaps they themselves, were quick to berate stupid, bigoted rednecks for the disastrous outcome. The caricature that emerged of the typical voter for the Republican winner was of an Anglo male, middle-aged and older, working class and possibly unemployed, and an uneducated bigot as well. While that demographic did make up a significant part of the winner’s constituency, it was not the majority. The picture that has emerged of the majority is of people with middle class and higher incomes, with college or higher educations, possibly with refined ethics, and a great many of them were female. It is simpler and more satisfying, however, to berate the stupid, bigoted rednecks living in the trailer park on the other side of the railroad tracks than it is to grapple with how it is that your neighbor on your suburban cul-de-sac, the nice one you’ve known for thirty years and who looks after your place while you’re away on vacation, how that kindly neighbor could have voted that way and done that to you.

This is meant as no defense for being a redneck, because unlike other personal characteristics it is not intrinsic and immutable, but rather the culmination of a number of repugnant beliefs, attitudes, and behaviors. People confuse rednecks with good ol’ boys. They are not the same. The protagonists in Deliverance were good ol’ boys; the moronic backwoodsmen they tangled with were rednecks. All this appears to stray far from the discussion of scapegoating illegal immigrants, but not really, because the outcome is ugly whatever the source, high or low, and whether the people at the receiving end are “bad hombres” or “deplorables”.
― Ed.