May 20, 2018 Editor
In the first of two presidential campaign debates in 1988, when Vice President George H.W. Bush referred to his opponent, Democratic Massachusetts Governor Michael Dukakis, as a “card-carrying member of the ACLU” (American Civil Liberties Union), he was actually citing Governor Dukakis’s own words from his speeches during the Democratic primaries, when he wanted to appeal to the left wing of the party. Governor Dukakis’s choice of words were unfortunate for him given the connotations of the phrase “card-carrying member” ever since the red-baiting days of the early 1950s Joseph McCarthy era, and the Bush campaign probably couldn’t believe their luck in that Governor Dukakis handed them such a juicy gift with which to smear him.
They knew and counted on the reality that most of the public do not delve deeply into the true meaning of things, and instead are all too eager to fall back lazily on shorthand terms. Conservative independents, to the extent they understood at all what the ACLU was about, had only to hear that the organization had the words “civil liberties” and “union” in it, and that Governor Dukakis was a “card-carrying member” of it, to jump to the conclusion that the man from Massachusetts with the foreign sounding name was practically a Communist, resulting in their bolting toward Vice President Bush. Governor Dukakis spent the rest of the campaign explaining himself regarding that and other blunders, and once he went on the defensive the campaign was over. Ever since then, mainstream Democrats have been careful to define themselves as Republicans Lite, rather than being card-carrying members of any organization other than Corporate America. 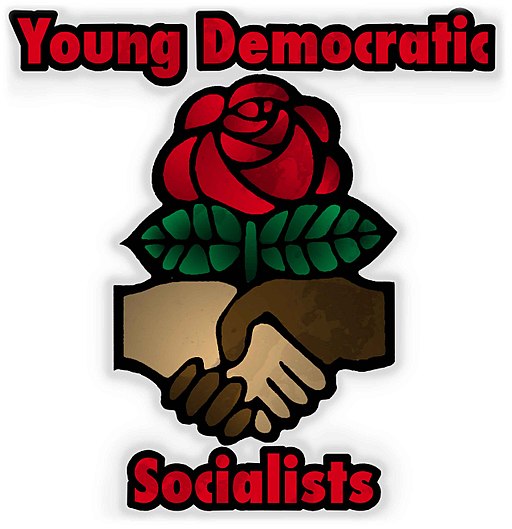 A logo designed in 2010 by Sean Monahan for a wing of the Democratic Socialists of America. Since 2016, about 24,000 people have joined the DSA, most of them under age 35.
A public service announcement from the ACLU in reaction to the use in 1988 by the Bush campaign of the phrase “card-carrying member” as a smear tactic. Interesting to note the mentions of the ACLU defending Oliver North.

In good news for people who would still like to work within the Democratic Party but who see it as hopelessly beholden to corporations while cynically throwing identity politics bones to the left wing in order to appease them, candidates for local and state offices around the country who are endorsed by the Democratic Socialists of America (DSA) are having success in elections since 2016. The DSA is not a political party. It is an activist movement within and sometimes without the Democratic Party, and it endorses candidates who push its policy goals such as a $15 an hour minimum wage and getting the corrupting influence of corporate money out of politics. Michael Harrington founded the DSA in 1982, and the organization had not seen much success until the past two years, when Vermont Senator Bernie Sanders openly avowed socialist principles in his presidential campaign, for many people doing away with the stigma of socialism that Governor Dukakis had tried to wipe off himself in 1988.

Most of the people inspired to become members of the DSA by Senator Sanders’s example, even though he himself had never joined, were not yet born in 1988 when the Bush campaign found it incredibly easy and profitable to brand Governor Dukakis an extreme leftist and make it stick with the public. For these downwardly mobile Millennials, some of them highly educated and many of them underemployed, the myth of capitalism raising all boats is for suckers. These were the people who formed the core of the Occupy movement in 2011, and when the establishment in the Democratic Party pushed everyone to accept their Republican Lite candidate, Hillary Clinton, while using subterfuge to undermine Senator Sanders’s candidacy, leading ultimately to the debacle of the general election, some of these same politically active young Democrats turned to the DSA to work to change the Democratic Party from the grass roots on up.

As the 2018 mid-term elections approach, Cenk Uygur delivers an astute analysis of the Democratic Party establishment from a perspective to the left of the mainstream. As always in keeping a wary eye on politics and politicians, it is good advice to follow the money.

The national Democratic Party establishment is too compromised and seduced by corporate money to listen to what working class and middle class people in places like western Pennsylvania are concerned about, the same people who essentially cast protest votes for Orange Julius in 2016, as ill-advised as that may have been. The Democratic establishment will try to make the 2018 midterm elections a referendum on Orange Julius, and to a certain extent they should, but what they are missing in their tone deafness to the needs of Americans in places like western Pennsylvania and Flint, Michigan, and the dairy farms of Wisconsin, is the desire of citizens there to see Democrats demonstrating real intentions to implement policies once they are in office that will improve the lives of the majority, instead of just big money corporate donors. The national Democratic Party establishment is hopelessly out of touch with those citizens. Card-carrying DSA members, working with local and state candidates, understand positive change will only come by listening to and serving citizens directly, and ignoring the cumbersome Democratic Party establishment, which is interested only in perpetuating itself by offering the easy way out by criticizing the current president’s disastrous administration, and in replacing his corporate water carriers with their own.
— Ed.

February 24, 2017 Isidore Gnome
The ongoing dispute that Energy Transfer Partners, in cooperation with the federal government, is having with several Native American tribes over the Dakota Access Pipeline section that crosses the Standing Rock Indian Reservation in North Dakota brings up questions about water and its importance to everyday existence. Obviously clean water is essential to life, which is apparently why the Army Corps of Engineers moved the original path of the pipeline from north of Bismarck, North Dakota, where it would threaten the integrity of water supplies there should the pipeline fail and leak oil. How is clean water then less essential to life on the Standing Rock Indian Reservation south of Bismarck, because that is where they relocated the pipeline? Besides the issue of trespassing on sacred grounds on the Reservation, there is the elemental matter of maintaining the integrity of clean water for the Reservation’s animal and human inhabitants. 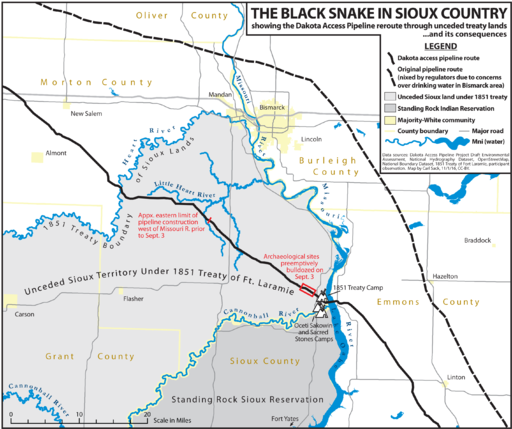 Dakota Access Pipeline reroute; map by Carl Sack.
The Sons of the Pioneers were the first to perform this song written by one of their own, Bob Nolan, in the 1930s, and since then other artists have covered it dozens of times.
The Dakota Access Pipeline stretches from the oil shale fields of northwest North Dakota to an oil tank farm in southern Illinois, crossing much privately owned farmland along the way. The controversial use of eminent domain to gain access for a privately owned corporate partnership is another subject. The issue at hand here is how the elders of Standing Rock Indian Reservation, which technically speaking in the language of treaties with the federal government represent the interests of a sovereign nation within the borders of the United States, can fend off this challenge to their land and their water. Does the federal use of eminent domain apply in their case? The common sense answer would be “no.” History has shown, however, that the “sovereign nation” bit in treaties between the United States and Native American tribes was a mere sop not worth the paper it was written on, and intended only to placate the tribes until such time as we needed their land for one reason or another. All bets were off then, and might made right. That’s what the current controversy comes down to, and after a brief stay from the Obama adminstration in continuing construction of the pipeline across Indian land, the new administration under Supreme Leader has weighed in with a sadly predictable decision.
Since the 1980s, when bottled water first started showing up in quantity in supermarkets in the United States, Americans seem to have taken for granted the rare and precious resource that is clean water. Particularly in the eastern half of the country, where (Flint, Michigan aside) municipal water supplies have been plentiful and largely free of problems, Americans have become deluded by the strange idea that the water coming out of their taps was somehow deficient and that the bottled water they bought from the supermarket was better. At first, due to the aura of prestige surrounding European bottled water brands like Perrier and Evian, people bought and sipped bottled water as a matter of status. Eventually it became just a thing to do. This proved to be a type of madness, particularly after the water in bottles proved to be no better, and in some cases worse, than the water coming out of most people’s taps, at least in the eastern half of the United States. People in the western half of the country often have had to cope with tap water that was  unacceptably hard, and have had more reason therefore to turn to bottled water.
The Washita River Massacre portrayed in the 1970 film Little Big Man. Anti-war and anti-government sentiment of the time influenced this film, but its portrayal of Native Americans and their distressing relationship to their conquerors was a welcome corrective after decades of stilted, one-sided inaccuracies in Hollywood movies. The tune is “Garry Owen”, an Irish quickstep adapted as the marching song for Custer’s 7th Cavalry.
“You don’t know what you’ve got ’til it’s gone.” ― Joni Mitchell
In some cases, buying and consuming commercially produced distilled water, even in the United States, the land of mostly wholesome public drinking water compared to much of the rest of the world, is not a bad idea. Other than that, the idea of giving international conglomerates like Nestlé and Coca-Cola more money and control over water supplies, a resource far more precious than oil, is foolish and insane. The Native American protesters and their supporters at Standing Rock have the sane and sagacious idea of protecting the water that courses through the Reservation, and considering the vital importance of that resource the rest of us had best pay attention now because it will flow our way in time.
― Izzy