November 5, 2017 Isidore Gnome
Since the loss of most of the Gros Michel, or Big Mike, banana plantations due to a destructive root rot by the middle of the twentieth century, the Cavendish has taken over as the most productive banana variety worldwide. By all accounts the Gros Michel was a more flavorful variety than the Cavendish, but growers who wanted to continue producing on a vast scale for the international market had no choice but to switch after fungus reduced the productivity of Gros Michel to an uneconomical level. Now the Cavendish faces similar destruction from another strain of the same fungus, and agronomists are scrambling to find a replacement for the Cavendish.

The Cavendish banana, like the Gros Michel, is a clone. One plant of Cavendish is exactly like the next plant of Cavendish. Such a monoculture is extremely susceptible to pest and disease problems because it cannot adapt through genetic accidents brought about by sexual reproduction. It’s a stationary target. Growers could turn to the extraordinary variety of other, sexually reproduced bananas, and they do just that locally in the tropical areas of the world where bananas grow. The problem for growers who sell internationally has always been finding disease and pest resistant varieties that would hold up under less than ideal shipping conditions and still be economically viable on a large scale.

The first in a series of animated commercials produced by the United Fruit Company in the 1940s for display in movie theaters. The singer was Monica Lewis.
Bananas naturally contain numerous large, hard seeds, making eating them a challenge. It is easier to comprehend the relationship of bananas to berries when confronted with all those seeds. Besides being unavoidable to banana eaters, the seeds were also viable. Modern commercial varieties like the Cavendish have been bred to have seeds that are barely noticeable, turning those varieties into convenience foods. Peel, eat, and don’t worry about the seeds. In the process of hybridizing banana varieties for less inconvenient seeds, agronomists also rendered the seeds unviable. The Cavendish, like the Gros Michel before it, reproduces only exact replicas of itself from parts of an existing plant, without benefit of differing input from any close relatives.

Reliably predictable results are great news for economic giants in any sphere, and agriculture is no exception. The American agribusinesses United Fruit and Standard Fruit, which eventually morphed into Chiquita and Dole, respectively, built themselves into indomitable international forces largely on the predictability of first the Gros Michel and then the Cavendish. They became enormously powerful, vertically integrated corporations that controlled the internal politics of many Latin American countries – the so-called banana republics – and pulled the strings of the United States’ foreign policy. All so that people in wealthy, temperate zone countries could enjoy a fruit that grew only in the tropics. 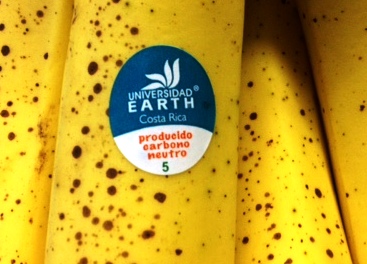 It is possible to buy bananas in the U.S. that have been grown in a more ethically sound and environmentally friendly manner than those produced by the huge international companies, but expect to pay a premium. Photo by Axxis10.
Unlike the spice trade, which also dealt in commodities that mostly grew in the tropics, bananas were and are a superfluous item in the diets of people outside the tropics. Spices were valued in the days before refrigeration on account of their utility in preserving other foods or making them more palatable. Bananas are high in potassium, an essential mineral, but so are potatoes and beans, both of which grow well in temperate zones, as well as being available for winter eating due to their good storage qualities. Bananas sold in temperate zone countries are luxury items available at affordable prices due to the ability of powerful international corporations to exploit cheap labor in tropical countries for growing a dependable crop capable of surviving shipment halfway around the world and arriving in salable condition.

The economic model developed by United Fruit and Standard Fruit in the early twentieth century has been copied and adapted ever since by growers and shippers of other produce, from grapes to mangoes, available now in temperate zone countries even in the middle of winter. As nice as it would be for large international banana producers to abandon monoculture with its reliance on pesticides and fungicides, only to have to abandon that one variety when its production is no longer economically sustainable, they may have no other choice if they want to continue with business as usual. It’s in the nature of their economic model. Locally sustainable small scale agricultural production would of course apply to bananas consumed in the tropics, as it always has, but not in colder countries, where they do not grow.

For all the convenience in the past century and more of being able to pick up a bunch of bananas at the grocer’s in countries where the average person would be more likely to see sub-tropical citrus fruit orchards than tropical banana plantations, not everyone enjoys bananas, or at least not the texture of actual bananas. They may like banana flavor, but they don’t care for the texture, which can be mushy and sticky, activating their gag reflex. For those people, the absence of bananas from the grocer’s would not be a painful loss. Certainly they would still like to have overripe bananas to use in banana bread and other delicious recipes. But unlike the supposedly fresh bananas for eating out of hand, bananas for cooking don’t have to look perfect. In that case, imperfect is just fine.
― Izzy

The last scene of Billy Wilder’s 1959 comedy Some Like It Hot, with Joe E. Brown and Jack Lemmon. 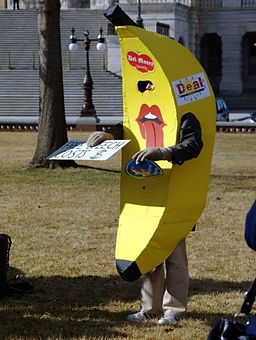