March 20, 2018 Vita Historia
The evangelical Christianity we are familiar with today in the United States does not resemble what it was prior to the Civil War, when evangelical Protestants promoted social justice issues such as the end of slavery. Slavery was the primary issue that divided some Protestant denominations, the Baptists more than any others because of the strong presence of Baptists in the South. Rancor over the issue within the Baptist denomination eventually led to its division before the Civil War into Northern and Southern sects, a division which has continued to this day. 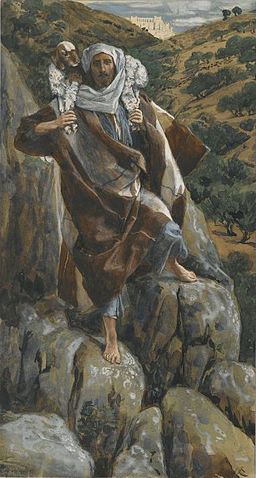 Le bon pasteur (The Good Shepherd), a painting from between 1886 and 1894 by the French artist James Tissot (1836-1902).
When people think of evangelical Christians active in modern political life, largely in conservative Republican circles, they are primarily thinking of Southern Baptists, because that is the denomination which has dominated politics and culture in the South since the Civil War, and it is from the South in the 1970s that arose the major political and cultural movement known first as the Moral Majority, and since then mostly known as the Christian Right. For over a hundred years, the dominance of Southern Baptists over life in the South was as close to a state sanctioned religion as we have gotten in this country, or at least in one part of it. Other Protestant denominations in the South, such as the Pentecostals, have been a part of modern evangelical Christianity, but the Southern Baptists have always been the major players.
As the de facto state religion of the South in the Jim Crow era and beyond, Southern Baptists were more interested in preserving white privilege and power than in promoting the kind of social justice Jesus advocated in His teachings. The Southern Baptists chose to ignore many of those ideas from the New Testament, lest they give black folks unsavory and rebellious ideas, and instead focused on the rewards waiting for the saved in the afterlife, where it wouldn’t cost the earthly white leaders anything in money or power. As the South remained rather isolated and more conservative than the rest of the country throughout the first two thirds of the twentieth century, there were further fractures within Protestant denominations, with the more liberal Northern sects increasingly considered the mainline portions of each denomination, and the Southern sects more and more lumped together as evangelical Christians, but with the twist that these evangelicals were largely white conservatives more vested in the status quo than in change for social justice. 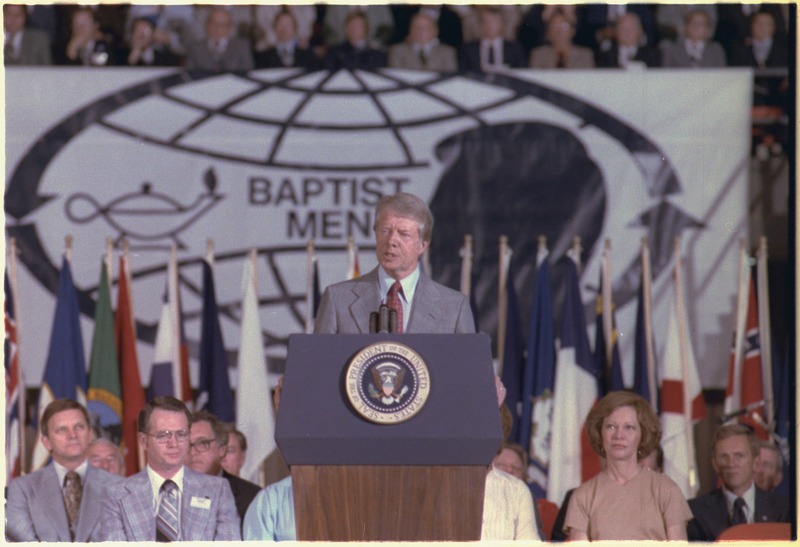 President Jimmy Carter addresses the Southern Baptist Convention in Atlanta, GA, in June 1978. Evangelical Christians were lukewarm at best regarding Mr. Carter, and in the 1980 election they turned him out in favor of the more conservative Ronald Reagan. Since then, Mr. Carter has devoted himself to humanitarian causes around the world, including Habitat for Humanity, all of which earned him the honor of a Nobel Peace Prize in 2002. 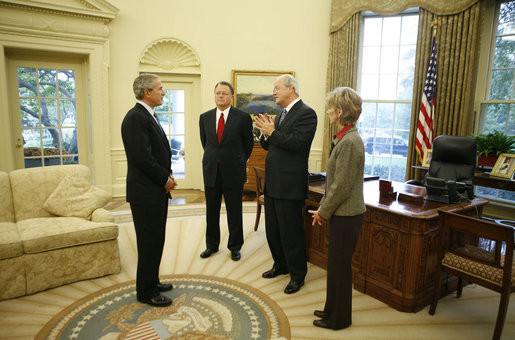 President George W. Bush meets with the leadership of the Southern Baptist Convention in the Oval Office in October 2006. Pictured with the President are Dr. Morris Chapman, left, Dr. Frank Page, and his wife Dayle Page. Mr. Bush the Younger was more to the liking of evangelical Christians than any president of the past 40 years other than Ronald Reagan. White House photo by Paul Morse.
When the Internal Revenue Service (IRS) in the 1970s went after Bob Jones University, a private evangelical school in Greenville, South Carolina, to revoke its tax exempt status on account of not adhering to Civil Rights era desegregation laws, Southern Baptists, which by that time had become indistinguishable from evangelicals, were catalyzed into action, forming the Moral Majority in order to take an activist role in national politics. They added abortion later as a rallying cause and it also served to mask the initial, primary impetus for organizing politically, which was the affront by federal interference into their pocketbooks and their white supremacist fiefdom. From the 1970s until today evangelical Christians, the Christian Right, have been a force in national politics, and never has their participation been more perverse at first glance than their unwavering support for the current president with all his defiantly un-Christian character flaws, but with an understanding of their history it begins to make sense, though it doesn’t make it right.
— Vita