Can You See Me Now?

December 20, 2020 Techly DoRight
A new law goes into effect on December 20, 2020, banning Internet Service Providers (ISPs) from charging a rental fee to consumers for company equipment such as modems and routers even when consumers prefer to use their own equipment instead. For years, ISPs have gotten away with charging rental fees on the basis of network compatibility and service support, conveniently ignoring instances where equipment owned by consumers may be the equal of equipment provided by the ISPs, or even superior to it. This was a situation rather like a subscription meal service grabbing an additional monthly fee for the rental of its proprietary tableware and cutlery, regardless of whether the subscriber already possessed adequate means to prepare and eat the provided meals. 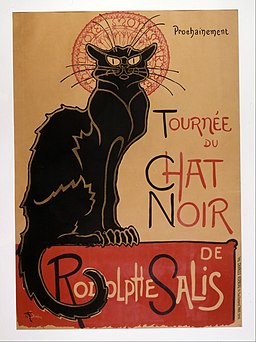 An 1896 poster by Théophile Steinlein (1859-1923) advertising a tour of The Black Cat cabaret troupe led by the impresario Rodolphe Salis.
This is no small matter in these times of exponentially increasing broadband internet use as video conferencing, a bandwidth hog, has taken off with businesses, consumers, and students and their schools because of the demands of the coronavirus pandemic. When parents are working on their computers at home, using Zoom or any of a half dozen other video conferencing applications to stay in touch with employers, employees, and clients, and at the same time their children are at home learning remotely from teachers on their computers, also using video conferencing, the demands on a home router are greater than ever before, and the consequences of poor performance are more critical than they would be for streaming entertainment during hours off from work or school.
Now that ISPs are no longer allowed to penalize consumers for using their own equipment, the next step is to make it easier for consumers to ascertain compatibility of any equipment with their provider’s network and service plans. It’s understandable that 1Gbps (Gigabit per second) service requires a modem capable of handling that speed of throughput, and that a router handling data requests from multiple devices simultaneously needs to be more robust than a router dedicated to only one device. ISPs and equipment manufacturers should make it easy for consumers to determine compatibility prior to purchase, rather than blindly trying to match equipment to service through trial and error.
For many years, Henri, Le Chat Noir (The Black Cat), was the star of short films featuring his dour philosophical musings. Henri, who retired a couple of years ago, died earlier this month, but his legacy lives on among internet surfers as one of the first standouts in the cat video genre, and always among the best.
Better communication between ISPs and equipment manufacturers could develop standards that can be easily determined by consumers through labeling of a piece of equipment’s network compatibility and its minimum and maximum performance capabilities, cross referenced with the network’s requirements for safe and effective performance. Such easily referenced labeling will free up everyone’s time and energy for more worthwhile pursuits, like watching cat videos when they’re not on Zoom calls.
— Techly