In the Time of the Virus

August 16, 2020 Vita Historia
Schools around the country have either started the fall semester or are about to, some opening their buildings to students and others not, and everywhere there is confusion and apprehension about the changed circumstances due to coping with the coronavirus. Will students, especially the very young ones, be able to maintain their concentration when learning remotely? If they attend classes in person, will they endanger themselves and everyone in school as well as at home because of failure to maintain the new disciplines of social distancing, mask wearing, and frequent, conscientious sanitation?
Back in 1918 and 1919 during the worldwide outbreak of the Spanish Flu, remote learning meant home schooling. Social distancing was barely understood, and other measures to contain the deadly flu were haphazardly implemented from locality to locality. Where city-wide rules went into effect, such as in Milwaukee, Wisconsin, where officials closed the schools and banned some public gatherings (notably excepting saloons), the contagion’s effects were limited in comparison to places like Boston, Massachusetts, where public life went on much as before. 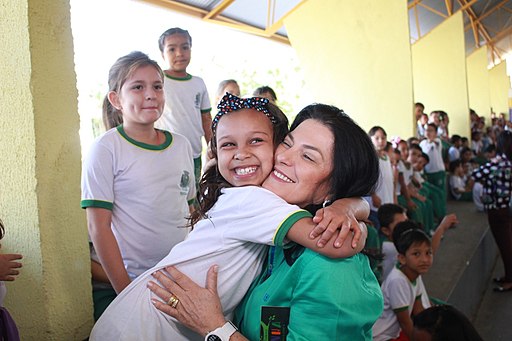 Rosana Martinelli, mayor of Sinop, a city in the Brazilian state of Mato Grosso, meets with schoolchildren in May 2020, before the coronavirus pandemic gripped that country. Photo provided by Rosana Martinelli.
Schoolchildren, however, are a special case, then as now. Besides having a limited understanding of what’s at stake and the measures necessary to protect everyone from the coronavirus, many are incapable of respecting boundaries. Children, the younger ones particularly, by nature lack social control. For proper development, children need social contact of all kinds, whether that means actual touching or merely being in the presence of other children and adults. Can children, especially the very young, be expected to sit still and apart from each other for six hours or more every day, never getting close enough to play and roughhouse with each other?

The experiment of returning children en masse to in-person learning from teachers in school buildings is bound to fail. The primary reason for trying it out is to mollify those right wing supporters of the current president who are clamoring loudly for schools to reopen for a number of reasons, but mostly to do with denying the reality of the pandemic while somehow boosting their cult leader’s chances of reelection in November. The experiment will fail before November, and the school boards responsible for catering to right wing extremists can then say that they tried. Meanwhile, thousands of people will fall ill unnecessarily and some will die, sacrificed to the experiment.

An episode of Pocoyo called “Don’t Touch!” wherein Pocoyo, a very young boy, tries and fails to restrain himself from touching, demonstrating a lack of self-control natural to small children. Narration is by Stephen Fry.

There are other people, surely, with reasons for wanting the schools opened for in-person attendance. Working class families, for instance, many with only a single parent, have managed with great difficulty the extra burden of their children staying home more than usual. Those are the people most in need of assistance now, both financially and by having school districts reach out to them with help in keeping their children safe at home and learning. Family circumstances have changed in the century since the Spanish Flu outbreak, when it was more likely that one parent would be home during the day.

It would not serve today’s parents well to have their children exposed to risk at school, where they might easily pick up the coronavirus from classmates and then bring it home to their families. Working class parents already expose themselves to risk because they cannot afford to quarantine at home, but most go out in public to work, many of them in low-paid service economy jobs with few, if any, health benefits. Keep the kids at home for now, where being out of touch during a pandemic can be a good thing.
— Vita