Researchers with the Massachusetts Institute of Technology (MIT) and the Pontifical Catholic University of Chile have developed an insulating material which allows a device to achieve a cooling differential of up to 23 degrees Fahrenheit using no electricity and no moving parts. 23 degrees cooling may not be sufficient on its own in all applications, but it will certainly increase the efficiency of existing devices by assisting them in not working as hard and thereby using less electricity. The useful attributes of the new insulator will help mitigate the climate warming effects of increased use of air conditioning and refrigeration, which in turn can lead to increased climate warming, and on and on.


Heating and cooling of indoor spaces accounts for between 40 and 60 percent of energy use worldwide, depending on location and also on who is doing the studies and how. It’s enough to know that indoor climate control is the single biggest factor in energy use around the world. Heating is the larger portion of the 40 to 60 percent of energy use, but that could flip by mid-century as the warming climate increases demand for cooling and lessens demand for heating. Be that as it may, it helps to understand that overall energy use will continue climbing, as it has throughout human history, though perhaps at a lesser rate due to improvements in the efficiency of devices and systems. 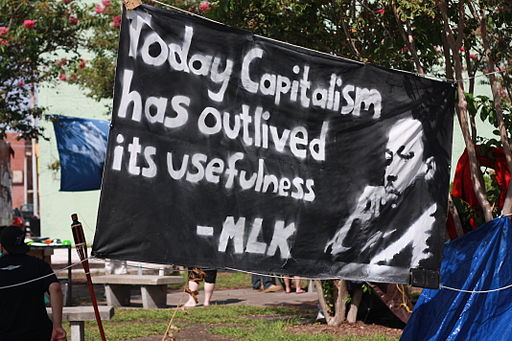 A banner outside the August 2012 Republican National Convention in Tampa, Florida, displays an image of Martin Luther King, Jr., along with a quote from him. Though the Reverend Dr. King’s remarks and activism on behalf of civil rights earned the most attention, his beliefs about the evils of unbridled capitalism and militarism were also worrisome to leaders of the nation’s power structure. Photo by Flickr user Liz Mc.


The achievements of researchers and engineers who develop improvements in using energy more efficiently are necessary and helpful in the fight against global warming, and they are to be lauded. It is government and business leaders and ourselves, the users of energy, who deserve condemnation as improvements in energy efficiency come without changes in the overall demand for energy and reduction of its deleterious effects on the climate. Embracing improvements in efficiency without simultaneously reducing our demand for more of a currently harmful thing is like rearranging the deck chairs on the Titanic.

Eliminating the burning of fossil fuels for energy will make the single greatest reduction in the pollutants causing global warming. That seems obvious, and it’s a simple statement to make, but it conflicts with powerful corporate, capitalist interests. Switching energy production entirely to renewable sources like wind, solar, and hydroelectric will greatly reduce pollutants, though not eliminate them. That also seems obvious. Ignoring for the moment the fraction of the population who blindly refuse to acknowledge responsibility for what is happening all around them, there is a greater obstructive force standing in the way of reducing carbon emissions enough in the next 10 years to slow – or even halt – climate change, and it is called capitalism.

The Trio of Emmylou Harris, Dolly Parton, and Linda Ronstadt sing “After the Gold Rush” on Late Show with David Letterman on March 24, 1999. Neil Young wrote the song for his 1970 solo album, and the lyrics of the final verse dreaming about escape from this planet to a new home are bound to remain a dream for the foreseeable future, despite the efforts of technology capitalist Elon Musk.

At the climax of Michael Crichton’s 1969 novel The Andromeda Strain, the team of scientists studying an alien microbe they have dubbed “Andromeda” discover in the nick of time that the destructive microbe would grow out of control if given a nearly limitless source of energy, in this case the detonation of a nuclear device meant to contain it by destroying it. They discover the opposite would happen, that the Andromeda strain would feed greedily on the energy supplied by nuclear fission and would quickly overtake the planet, and in a tense scene during the countdown to detonation, they manage to disarm the research facility’s nuclear device. Capitalism is similarly greedy and destructive. It is a system that needs close watching and regulation, not the rampant deregulation of the past 40 years. Like the unregulated sex urge which has led to global overpopulation and the consequent strain on the earth’s resources, greed is also an innate urge in humans, an urge that has found its closest reflection in capitalism, and unregulated it plunders and eventually destroys the earth’s resources, including its many peoples, rich and poor alike.
— Techly