August 1, 2019 Editor
It’s not necessary to dive into the dark hole of right wing media articles attacking the so-called Squad of four Democratic congresswomen to catch the drift of the big stink they make; instead, simply read the loaded language of their sneering, derisive headlines. The most obvious characteristic of right wing media headlines of articles about these four women is the use of language indicating they are bad girls who deserve to be put in their place, even punished. This is a characteristic of right wing authoritarians, who see those who disagree with them as misguided souls deserving the wrath of Old Testament Jehovah.
The authoritarian right wing media seems to have a sliding scale of punishments for meting out to liberals. Of the four women in The Squad, Representatives Alexandria Ocasio-Cortez (D-NY) and Ayanna Pressley (D-MA) appear to be naughty young ladies in need of correction, according to the authoritarian mindset, while Representatives Ilhan Omar (D-MN) and Rashida Tlaib (D-MI), being Muslim, are too far Other for authoritarians to bother at all about disciplining, and therefore beyond the pale altogether and deserving of harsher treatment. Which is not to say the inflammatory language of right wing media has not fanned enough hatred in some quarters to prompt threats of violence against any of the congresswomen, regardless of the patronizing view that two of the four may be capable of redemption if only they would stop being uppity. 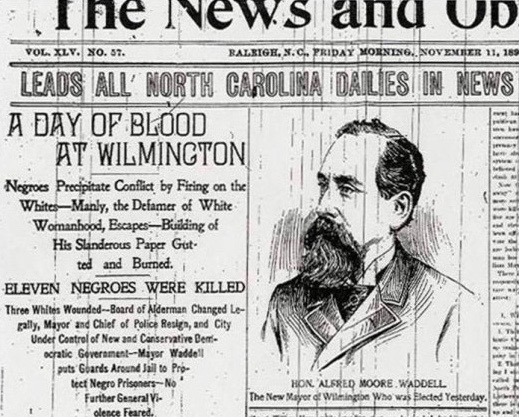 The News and Observer, a newspaper in Raleigh, North Carolina, spins the events of the Wilmington insurrection of 1898 in headlines for the November 11, 1898 edition of the paper to suit the viewpoint of the white supremacist power structure. As the preacher observed in Ecclesiastes 1:9, “There is nothing new under the sun.”
Using any decent news aggregator website which offers a buffet of articles from across the political spectrum, rather than from only one side or the other, makes it easier to spot the language of paternalism and punishment in right wing headlines because of the contrast with the article headlines from other media outlets. Loaded language is unfortunately a feature of too many media outlets, whether from the left or the right, but it is the punishment angle which is unique to authoritarian right wing media. Those naughty Democrats! When will they ever learn? They’re messing with the wrong people, and the righteous shall come down hard on them, the transgressors!

From the 1980 film The Shining, directed by Stanley Kubrick, Jack Nicholson as Jack Torrance and Philip Stone as Delbert Grady discuss the need for correcting misbehavior.

Far right authoritarians are more likely to confine their media consumption to a bubble than are people on the left or in the center, because right wingers feel threatened by ideas and viewpoints from elsewhere on the political spectrum. That, too, along with the desire to punish others, is a feature of the authoritarian mindset. It’s tempting to edit a news aggregator’s collection choices, if that’s possible, in order to avoid even skimming the ugliness of many right wing media headlines. That would be a mistake; that would put the liberal or centrist news reader in their own bubble. It’s better to keep those headlines, with their self-serving denunciations and propagandistic lies, so as to be able to occasionally peek into the netherworld of far right wing media. It’s unnecessary and probably unhealthy to dive in and read the articles.
— Ed.