Weed Is the Word

June 16, 2019 Isidore Gnome
There are many respectable plants bearing the word “weed” in their common name, such as Butterfly Weed (Asclepias tuberosa), Joe Pye Weed (Eutrochium spp.), and Jewelweed (Impatiens capensis). Some are easily available at garden centers, some are available only by mail order, while still others will show up in the garden on their own. All demonstrate a propensity for spreading easily if conditions are right, and that is perhaps the reason for the designation “weed” in their common names. Latin names typically are not prejudiced against these less formal plants that straddle both the garden and the wilds. 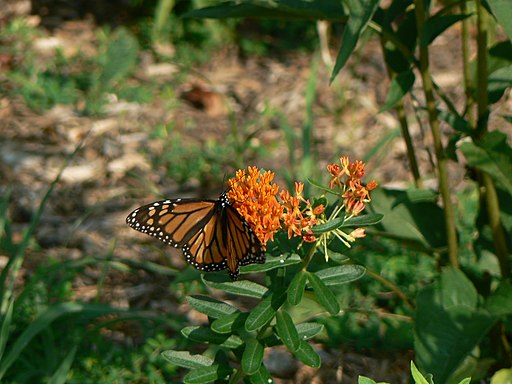 Monarch butterfly on a Butterfly Weed at Cape May National Wildlife Refuge in New Jersey. Photo by Laura Perlick for the United States Fish and Wildlife Service (USFWS).
Some gardeners do not look beyond the word “weed” in a name before they reach for their hoe or a chemical plant killer. Such gardeners are not independent thinkers, but ones who are locked into a binary view of the natural world, viewing everything as either good or bad. Try to explain to them that the inclusion of “weed” in a plant’s name can be merely a case of poor public relations. It’s worthwhile to get overly judgmental gardeners to stay their hand regarding these plants because they are often beneficial to butterflies, birds, and other wildlife, more so than a hybrid rose bush.
Other weeds, of course, do not have the word included in their name but have acquired it as a general type by reputation. For those weeds, gardeners and farmers have less tolerance and are apt to destroy them whenever encountered, though even those exist on a sliding scale. People are divided into several camps about Dandelions (Taraxacum spp.), for example, while they nearly universally abhor Palmer’s Pigweed (Amaranthus palmeri) and Lamb’s Quarters (Chenopodium berlandieri). Even those last two plants offer the feature of edibility, making them attractive on however limited a basis to at least some people and animals.

One important group of plants has acquired the name “weed”, and they are in the genus Cannabis, also known as Marijuana. Growers and users of the plant have called it “weed” and many other names besides for reasons of its outlaw, rebel status, as well as its diverse nature in checking off boxes from good to bad. Marijuana plants can spread readily on their own; mismanaged large scale cultivation, as opposed to the former practice of clandestinely maintaining relatively small plots, can have a negative impact on the environment; and for people the plant can range in usefulness from good to bad depending on the inclinations and prejudices of the person beholding it.

Paul Reubens as Pee-wee Herman performs “Surfin’ Bird”, a hit song for The Trashmen in 1963, in the 1987 movie Back to the Beach, with Frankie Avalon and Annette Funicello.
The word “weed” embraces many meanings, and means different things to different people depending on their tolerance level. To hear “weed” in a plant’s name and automatically seek to eradicate it from the garden is arbitrary and foolish. Better to take a more nuanced approach regarding the plants that don’t threaten to choke out every other plant in a garden plot. Some can be seen as friendlier than others regardless of being handicapped with a bad name. As for that other kind of “weed”, the kind some folks like to smoke, legally it’s gaining more widespread favor despite its outlaw name.
— Izzy