June 13, 2019 Techly DoRight
Ajit Pai, Chairman of the Federal Communications Commission (FCC), is at it again, undercutting support for dissemination of broadband internet service when it doesn’t suit the interests of major telecommunications companies. His latest effort involves capping spending on the FCC’s Universal Service programs, which are intended to make broadband available to poor urban neighborhoods and underserved rural areas. Mr. Pai and the other two Republican commissioners on the five person board have voted for the plan, and the next step will be a three month public comment period before the commissioners take a final vote. If most people commenting on the plan are against it, then Mr. Pai and his fellow Republican commissioners will likely ignore their wishes and subvert the comment period with shenanigans intended to muddy the waters, just as they did two years ago with the net neutrality rule change.
Government support – or lack of it – for promoting broadband internet service for the entire country is a mishmash of conflicting goals, regulations, and laws at the federal, state, and municipal levels. The FCC under Mr. Pai serves the interests of telecommunications companies, which often do not coincide with those of citizens, while paying lip service to broadband service for all. The current president, who appointed Mr. Pai chairman, is hopelessly muddled in his understanding of the aims and actions of his own administration, as he demonstrated once again in his recent comments about how farmers cannot connect benefit their operations by connecting to broadband service because of deficient infrastructure in the countryside. Of course he and his followers do not care about the facts behind that deficiency, and he may get around as he always does to blaming Barack Obama and Democrats generally for the problem while he does nothing to alleviate it and his administration actively makes it worse. 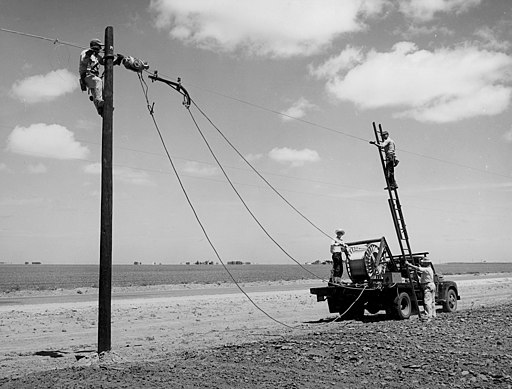 A United States Department of Agriculture (USDA) photo of a crew installing electric service lines in the countryside. The Rural Electrification Act of 1936 brought service to underserved areas through electric cooperatives owned by members, bypassing private utilities which saw little profit in the enterprise.
State legislatures around the country continue passing laws intended to cripple the ability of municipalities to take matters into their own hands and get broadband service to small towns and outlying areas. The legislators, mostly Republican, pass these laws at the behest of lobbyists for the major telecommunications companies, who claim services provided by municipalities would undercut their ability to compete. But the big companies aren’t interested in competing in small towns and the boonies anyway! Really they’re afraid it’s a good idea that will spread, and therefore they attack it as socialism, by which they mean it’s bad. Large telecommunications companies, like the large banks, are all for socialism when it benefits them.

Municipal governments and regional electric cooperatives are the only groups trying to ensure broadband service for poor and rural citizens, and trying to do it without price gouging. They get little help from federal and state governments, which often work either at cross purposes are try to undermine their efforts, again with the strings being pulled behind the scenes by Verizon, AT&T, Comcast, Charter, Sprint, and the rest of the big telecommunications companies. Naturally absolutely everyone says they are all for expanding broadband internet service at reasonable rates to poor and underserved areas – who wouldn’t come out in favor of that? – but the actions of many legislators, regulators, and company executives tell a different story. It would be best for citizens – customers – if everyone from the top down in government and private industry worked consistently and uniformly toward the one goal they all claim to be their mission, which is better serving the public, no matter who they are or where they live.
— Techly