We’ll Be Grading on a Curve

July 14, 2017 Techly DoRight
This past Wednesday, July 12, many internet companies and net neutrality advocacy groups participated in a “Day of Action to Save Net Neutrality”. They were attempting to influence Federal Communications Commission (FCC) Chairman Ajit Pai and his two fellow commissioners during the public comment period on reversing the 2015 FCC net neutrality rules, or as Chairman Pai would have it, “Restoring Internet Freedom”. 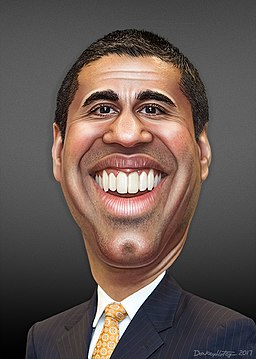 2017 caricature of Ajit Pai by DonkeyHotey.
The public comment period is open until mid-August and is all well and good, but based on Chairman Pai’s previous comments as well as recent remarks, the entire thing is merely a charade to satisfy bureaucratic regulations. After the public comment period is over, Chairman Pai and the other Republican on the Commission’s board will vote to roll back net neutrality and deal with the consequences in court over the next few years. The FCC board has space for five commissioners, but currently there are only three, two Republicans and one Democrat. [Editor’s note: For an accessible version of the Wikipedia page about the FCC, click here; the amount of commissioners listed on the page may have changed since this post was written.]

A fantasy scene from the 1983 film A Christmas Story, with Peter Billingsley as Ralphie, and Tedde Moore as his teacher, Miss Shields.

The recent remarks from Chairman Pai that make a mockery of the public comment period have to do with his off-hand dismissal of the sheer number of genuine letters, calls, and emails in favor of net neutrality on the grounds that numbers will not sway him, only the content as he judges it. Oh. In that case, he may be judging these comments, or compositions, based on grammar, originality, penmanship, and interesting presentation. Please have them all on his desk by mid-August, as late comments will be marked down for tardiness.

Mr. Pai, formerly a lawyer for Verizon, has not shown as much critical judgment of the anti net neutrality comments the FCC has received, many of them astroturfed. Those comments must have been from the “D” students, and Mr. Pai, in the interest of fairness to everybody, but particularly to them, has decided to overlook their faults and boost their grades at least to “C”. The smarty pants crowd will take what marks Mr. Pai gives them in the interest of Restoring Internet Freedom to Verizon, Comcast, CenturyLink, AT&T, and other mega-millions Internet Service Providers (ISP). There’s the level playing field everyone likes to believe in, and then there’s the reality of the playing field groundskeepers have groomed to suit the home team. To get all these mixed metaphors to agree, think of the grading curve fix which benefits major sport athletes in school. Verizon? A+!
― Techly