The Tariff of Abominations

Southerners called the 1828 tariff which had the effect of raising prices on imported manufactured goods while decreasing income from exported agricultural products the “Tariff of Abominations” because it hit hardest in the South. When President John Quincy Adams signed the bill into law, he assured his defeat by Andrew Jackson in the 1828 election. The 1828 tariff prompted South Carolina to propose the principle of nullification of federal law by the states, and the friction it set up between North and South was instrumental in leading to the Civil War more than 30 years later. 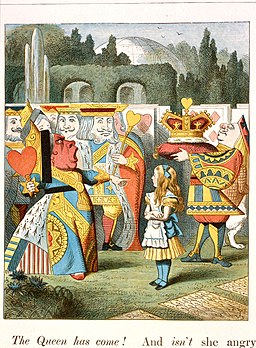 This color version of a John Tenniel illustration is from The Nursery “Alice” (1890), with text adapted for nursery readers by Lewis Carroll from his Alice’s Adventures in Wonderland. From the collection of the British Library. Carroll created in the Queen of Hearts, pictured at left, a model of imperious, irrational behavior.
The current president’s tariffs have exacerbated economic tensions within the country as well, this time not between North and South, but between rural, agricultural areas and urban, technological and industrial areas. They are his tariffs because over the past century Congress has ceded more and more authority to impose them to the executive branch as a matter of pursuing foreign policy, an authority which the current president, with his autocratic nature, is happy to exercise. He likes nothing better than to pronounce decrees, particularly ones that appear to punish Others, particularly foreign Others, and most especially darker skinned foreign Others.

He and his followers may not fully understand the possible ramifications and unwelcome reverberations of tariffs throughout the United States and world economy. It doesn’t matter to him or to them. What matters is the feeling of appearing to punish the Other for sins real and imagined against Our Kind, and of feeding off negative energy generated by acting on impulse rather than putting in the grinding, hard work necessary to build positively toward equitable trade agreements. It’s a lot of stick, and very little carrot.

Tariffs have always been used to further domestic political aims and foreign policy objectives as much as they have been used to generate revenue, which makes them somewhat more loaded than other taxes. The latest tariffs are no different, and their implementation echoes the 1828 tariff, an irony no doubt lost on the current president despite his exaltation of Andrew Jackson over all other American presidents. Jackson and his supporters opposed the 1828 tariff. Jackson nonetheless drew the line at allowing South Carolina to flout federal authority by proposing nullification. Jackson contemplated sending federal troops into South Carolina to uphold the law. Free trade advocates and protectionists reached a compromise with an 1833 tariff soon after the South Carolina legislature enacted nullification, averting a crisis and imposing an uneasy peace for the next 28 years.
From the 1951 film Quo Vadis, directed by Mervyn LeRoy and starring in this scene Peter Ustinov as Nero and Leo Genn as Petronius. Nero probably thought of himself as a stable genius, and had Twitter existed in his time, he no doubt would have used it as a political tool to share his addled observations with the world.
The political calculations behind the current president’s tariffs go beyond punishment of the Other which enthuse his base of followers to improving his prospects for the 2020 election in key Rust Belt states he narrowly won in 2016. Tariffs on steel, aluminum, and other industrial products appeal to manufacturing centers in Wisconsin, Michigan, and Pennsylvania, the states that tipped the Electoral College vote balance for him in 2016. Since the United States is a big exporter of agricultural products, it is no surprise that retaliatory tariffs imposed by other countries in the trade war have hit farmers hardest. Many of those farmers live in Great Plains states with relatively few electoral votes, and at any rate the current president has a cushion of support there to absorb losses of the disaffected. To make sure disaffection doesn’t become widespread, the current president has bought off farmers with subsidies so that he can continue to pursue his trade wars as personal vendettas, rather than as maturely considered policies leading to equitable prosperity for all. To borrow a phrase from the late novelist Kurt Vonnegut, “And so it goes.”
— Vita