March 10, 2019 Techly DoRight
A fanciful history of web design might start with scribes in an ancient Near East civilization, all of them dutifully impressing their clay tablets deeply enough to make the characters easily legible. One day, either intentionally or because of laziness or weariness, one scribe made shallow impressions for his characters, and instead of his fellow scribes rebuking him, they hailed his genius. They were probably hipsters, who seek conformity in their nonconformity, and for whom a new look is all the more appealing if it befuddles the masses. “I can barely read it,” exclaimed one hipster scribe, “and that’s what makes it brilliant!” “It hurts my eyes,” said another who was slow to catch the new wave. After noting the disapproving looks from the other scribes, he added “I mean, it hurt my eyes until I got used to it. Now I see it’s absolutely great!”
Like the fashion world it parallels, typography must endlessly reinvent itself around a practical matter. People need to wear clothes, and when they read, they need to be able to decipher characters, whether they are impressed on clay tablets, printed on a page, or delineated by tiny dots on a backlit screen. The reasons for reinvention have much to do with evolving tastes and the need for turnover in sales, and sometimes little to do with practicality. The trend of low contrast typography in web design is a case in point. Some designers and technology companies decided about ten years ago it would be nice to have gray text on a white or gray background, and soon the nonconformists were jumping on the bandwagon and conforming. Readers seeking information from grayed out websites have been straining their eyes in frustration ever since. 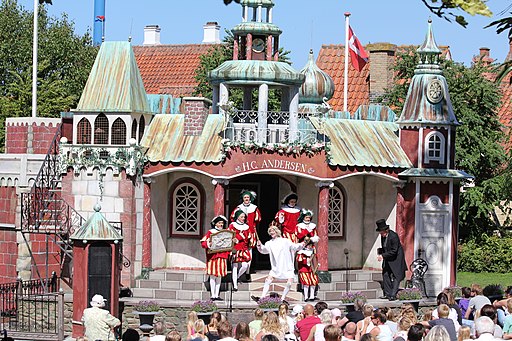 A theatrical presentation of “The Emperor’s New Clothes”, a story by Hans Christian Andersen. Photo by Danand.
There is a difference in strain on a reader’s eyes between the black on white of a printed page and the black on white of a backlit screen, with the latter being harder to take. Most books were never printed on absolutely pure white paper, and the black ink, when reflecting light, was never utterly black. Backlit screens can achieve greater contrast than print, but it’s best that they don’t because staring at very high contrast type can be a strain. The solution for screens is to lower the tone of the background, as can be seen by adjusting screen brightness or by using an application to reduce eye strain (the applications available on the market typically also change the color temperature).

A scene from The Invisible Man, a 1933 film based on a novel by H.G. Wells, directed by James Whale, with Claude Rains in the title role.

Computer users adjusting the brightness of their screens or using web applications for reducing eye strain took web designers out of the picture, however, and it appears they would have none of that. To support their design trend of using varying shades of gray text, they claimed they were enhancing legibility and reducing eye strain. There’s no evidence it does, and common sense and feedback from readers who don’t care about trends points to the opposite result. Low contrast web design is too low, and it ignores the real solution, which is not to tone down the font, but to tone down the background. Go ahead and use gray fonts on a gray background if it seems cool, silly as that is, but don’t reel off nonsensical mumbo jumbo to support that decision, and don’t expect all readers to drop to their knees and kiss the hem of those faded fonts.
— Techly