January 15, 2019 Vita Historia
Today a United States District Court judge in New York struck down an attempt by the Commerce Department, which oversees the Census Bureau, to add a citizenship question to the 2020 census questionnaire. Judge Jess Furman cited the 1946 Administrative Procedure Act (APA) in ruling against Commerce Department head Wilbur Ross, who proposed adding the citizenship question on specious grounds. The APA allows judicial review of a rules change by a federal government agency when a lawsuit is brought by an aggrieved party or party, in this case the New York Immigration Council (NYIC) and the American Civil Liberties Union (ACLU), among others. In other words, the APA gives citizens an avenue to check federal agencies directly, without waiting on Congress, so that agencies can’t change their rules willy nilly based on political whims. 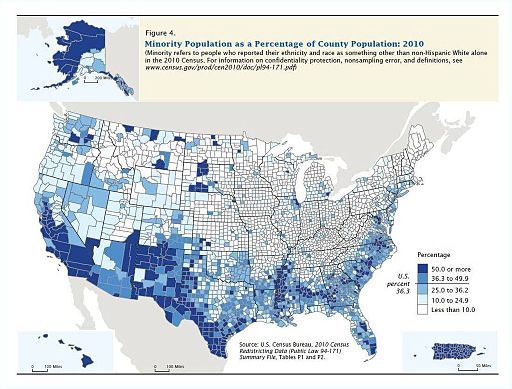 2010 census percentage change in minority population by county, showing an increase in typically Democratic voters in areas that have been Republican strongholds, such as the Southeast and the Mountain West. Illustration by U.S. Census Bureau.
The specious grounds the current presidential administration was using to add the citizenship question involved a far-fetched cover story about getting information to better enable the Justice Department to enforce the 1965 Voting Rights Act, when in practice the question was intended to intimidate mostly Hispanic illegal immigrants and possibly other minorities into not responding to the census questionnaire. Like state voter suppression laws, the census citizenship question could be used as a cudgel by Republicans to beat back the tide of typical Democratic voters and supporters. Illegal immigrants can’t vote, but counting their numbers usually benefits Democratic congressional districts when it comes to apportioning seats in Congress and the distribution of federal funds.
The history of the census in the United States is rife with political intrigue going back to the first one in 1790, when the big question involved counting of slaves. Like Hispanic illegal immigrants today, African forced immigrants in the first century of the republic could not vote, but counting their numbers was still vital for the reasons stated above. Once they could vote, after Emancipation, Southern conservatives did all in their power to ensure they could not exercise their right freely by enacting Jim Crow laws and practices to hinder them, often with threats of violence either implicit or explicit. 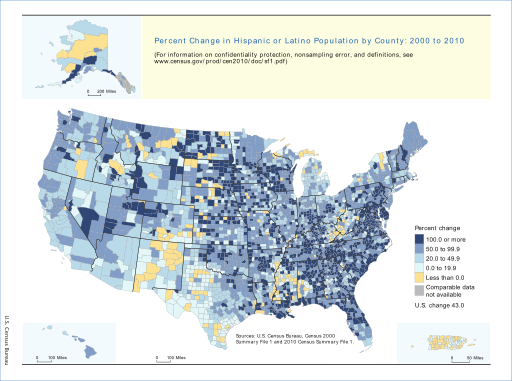 2010 census percentage change in Hispanic population by county, showing the widespread nature of the increase. Illustration by U.S. Census Bureau.
Southern white conservatives were Democrats then, in the late nineteenth century and up to the middle of the twentieth century, but shifts in national policy such as the 1965 Voting Rights Act changed that, flipping conservative Southern Democrats over to the Republican Party, where they remain today. In the meantime, African-Americans, attracted by manufacturing jobs in the North that paid better wages than agricultural labor in the South, moved away in great numbers during World War I, a mass migration which had the effect of relieving pressure on what had been the white minority in many congressional districts in the South. 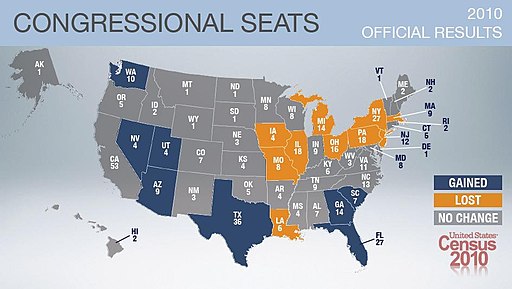 Reapportionment of Congressional seats as determined by results of the 2010 census. State legislatures use these results to redraw districts, sometimes in grievous examples of partisan gerrymandering. Illustration by the U.S. Census Bureau.
Now the Republican, conservative, white population in areas around the country besides the South feels threatened by impending minority status for themselves brought on by the increasing numbers of Hispanic immigrants, legal and otherwise, and by their relatively high birthrates. Thus far their have been no serious proposals for forced sterilization of Hispanics, as their had been for black people one hundred years ago. Instead the tactics of conservative white Republicans, no longer limited to the Old South, but spread around the country, consist of a citizenship question on the census questionnaire designed to drive illegal immigrants further into hiding, and since the immigrants often end up supporting Democrats even if they cannot vote, the intimidation would have the effect of depriving Democrats of additional seats in Congress and federal funds based on population alone. Once the new citizens are able to vote, Republicans have a bevy of voter suppression tactics ready to challenge them. Jim Crow just keeps popping up in new guises, cawing at the poor and unfortunate “Who are you? Who are you?”
— Vita