December 30, 2018 Editor
Website headline writers like to insert the word “just” in their copy for the sense of immediacy it conveys. They have room to insert the word because website headlines are usually sentence length descriptions rather than the terse summations newspaper copy editors used. Longer descriptions can be good teasers and also boost the rank of a website post in search engine results because that’s the way Google has decided sites and posts should be ranked, and Google sets the bar for search engines and for the internet generally. Ask them why.
Search engines don’t like the short headlines common in newspapers. The reason many headlines on the internet read the way they do is because writers are responding as much to what search engines like as they are to what they believe their readers like. It’s not easy keeping up with the Kardashians, and the only way websites can do it is to couch everything in terms of immediacy, as if it were all breaking news worthy of readers’ attention. To generate clicks on their posts and get them ranked highly in search engine results, website writers must tease about the content using descriptive headlines, and then make sure to give whatever they’re describing a sense of happening moments ago by tossing in “just” at least once. 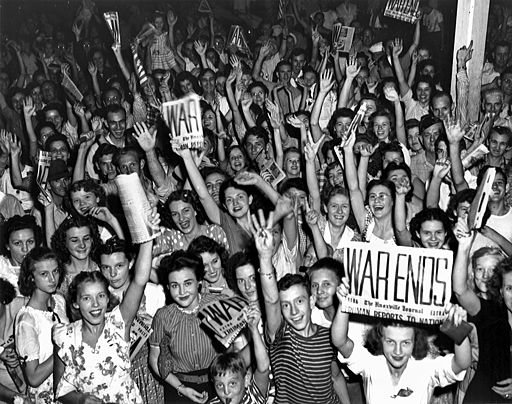 Residents of Oak Ridge, Tennessee, fill Jackson Square on August 14, 1945, to celebrate the surrender of Japan. Oak Ridge was one of three main sites of the Manhattan Project, and was responsible (though those working there did not know it) for refining uranium to be shipped to Los Alamos, New Mexico, to be fashioned into atomic bombs. Photo by Ed Westcott, working for the U.S. Army Corps of Engineers. The newspaper headline “War Ends” might not fly with today’s internet and social media news headline writers, who would be tempted to write “War Just Ends”, even though it would be open to multiple interpretations.
The tendency is to hype everything, even inconsequential matters. Add news sharing on social media, and the hype gets amplified to 11, as a member of the fictional heavy metal band Spinal Tap observed. Trust and references build credibility on social media, even if common sense and a little digging into sources reveals there are no grounds for credibility. Google hones search results based on what they know about users, and Facebook and Twitter follow Google’s lead while juicing results further by adding the finer details they know about their users. Facebook and Twitter set the bar in social media for how posts get pushed to the front for sharing on their platforms, and as long as readers keep clicking the wheels keep rolling, no matter how worthless are the posts everyone shares.

This clip from Sesame Street could serve as a metaphor for what the internet and social media have become.

A word such as “just” is a fine, serviceable word in most cases. Unfortunately, once some influential writers, platform arbiters, and readers on the world wide web and in social media adopt it as a manipulative expression it gets overused, abused, and misused on its way to becoming trite and tiresome. Just sayin’.
— Ed.