October 23, 2018 Techly DoRight
There are some people who are so afraid of change that they would rather curse the darkness of their current situation than light a candle to change it. Such people curse an onerously expensive Comcast or Charter cable television and internet bill and the infamously poor customer service of those companies, and yet when they are presented with alternatives they hem and haw and drag their feet about contacting a competitor to the large cable television and internet providers. Part of the problem is fear of change, and part of it is the desire to continue having all of everything, all at once.
People living in or near cities have choices of providers for their television and internet services, while choices for people living in the countryside are far more limited. Nevertheless, while choices may be limited, they are available to people everywhere in the United States who are willing to forego having daily access to obscure specialty channels on cable television or to hundreds of GigaBytes (GB) of data each month for streaming content over the internet. People have to be willing to give up the passivity of slouching on their couches and letting Comcast do everything for them. If that’s what they want, then fine, but don’t expect everyone else to be sympathetic to complaints about high monthly bills for lousy service. Curse the darkness to yourself if you’re unwilling to light a candle to help yourself. 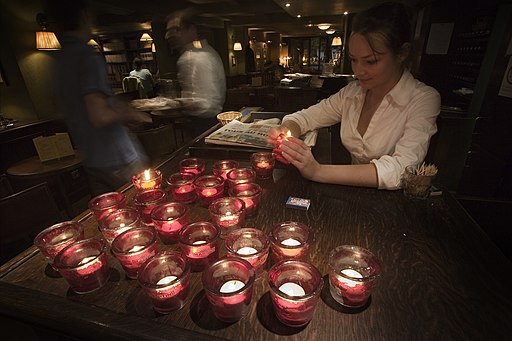 A waitress lighting candles in a bar in Paris, France, in 2008. Photo by Jorge Royan.
For everyone else, there is research to be done, most likely over the internet, a job for which it is very well suited. Research options for internet service providers other than the large companies. You may have to make sacrifices in one way or another when changing to a local, small scale provider, but that is part of cutting the cord. It’s like changing from buying most of your groceries at a national or regional chain grocer to buying them from a local farmers’ market or independent grocer. City dwellers will of course have more options when it comes to technology than country folks, but the important thing to realize is that there are options, as long as people ditch the idea of having all of everything done for them all at once.

The same thing applies to television service, which starts with cutting the cord without bothering to find a new cord provider. Get an antenna! Local television stations are adding digital subchannels every year, and receiving them with an antenna costs nothing. The two key things to remember in buying an antenna are that there is no such thing as a digital or high definition television antenna (an antenna is an antenna, built to receive electromagnetic frequencies regardless of whether the content of those signals is analog or digital), and that resolving digital television content requires a slightly more powerful antenna than in the old days of resolving analog content. Where a rabbit ears antenna may have done the job before, today an outdoor antenna may be necessary for adequate reception.

A nice story from the actor, Jamie Farr, about his early days struggling to make a living in Hollywood. Documentaries like this are much easier to find now on the internet than on cable television.

Some folks who are fortunate enough to have hundreds of GigaBytes of internet data available each month at a reasonable price can do away with cable or antenna television service altogether, and instead use their internet service for viewing television. Do your research! Ask questions of yourself first about what it is you watch most and can’t do without. How many different ways are there to receive that programming? Chances are there are multiple ways of receiving your favorite content, and continuing to rely solely on companies like Comcast and Charter is a disservice to yourself and a way of continuing to curse the darkness. To take documentaries – serious documentaries, that is, not Shark Week documentaries or anything involving Guy Fieri – as one example, it is obvious that cable television offerings have been replaced in the past ten years by what’s available for free on YouTube and by subscription on services such as Netflix. Don’t keep sitting in the dark – light a candle, just don’t expect it to vanquish all the shadows in your life.
— Techly