The Root of the Matter

March 16, 2018 Isidore Gnome
Growing ginger (Zingiber officinale) is not all that difficult in most parts of the United States as long as the grower understands that except in the warmest zones of the country, ginger is unlikely to produce mature rhizomes. Ginger has a nearly year long growing season, and in three fourths of the country that means it will only produce baby ginger rhizomes even with assistance from the grower to keep the plant warm at the beginning and the end of the growing season. Baby ginger is catching on in culinary circles, however, where it can be used to lighter effect than the full grown type. 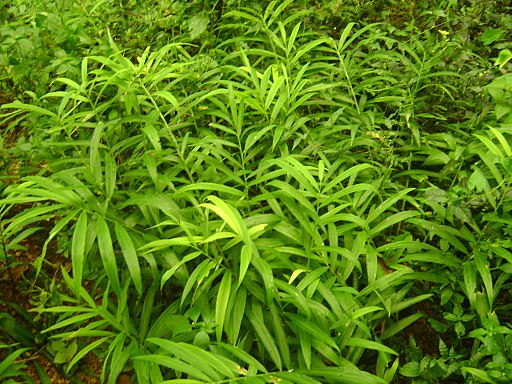 Ginger plants (Zingiber officinale). Photo by Ramjchandran.
The portion of a ginger plant generally used in cooking and medicine is the rhizome, which is technically an underground stem, but to most people it appears to be a tuber or root, and for practical purposes it makes little difference to them what that part of the plant is called. Like a potato, the ginger rhizome has eyes which are starting points for new growth and indicate to gardeners where to divide the rhizome when propagating the plant. Cut up the rhizome with one eye to each section and then plant the sections. In cases where a gardener is concerned with growing only enough ginger for home consumption, the simplest method of planting is one section of rhizome each to wide, shallow pots, which the gardener can move easily from indoors to outdoors and then back again over the course of the 8 or 9 month growing season.
Why go to even that much trouble for a non-native, tropical plant? There is after all a distant relative that is native to North America, known as wild ginger (Asarum canadense), which Native Americans had used in the past as a spice and a medicine, much like its Asian relative. The difference is that scientists have determined American wild ginger can be poisonous, while Asian ginger is safe to consume. In addition to its salutary effect in food and drink recipes, many people believe Asian ginger has anti-inflammatory, anti-arthritic, and anti-nausea properties. Scientists have not necessarily agreed with all those assessments, though they recognize that in the amounts typically consumed by most people there is no harm to eating ginger spiced foods or imbibing ginger infused drinks. 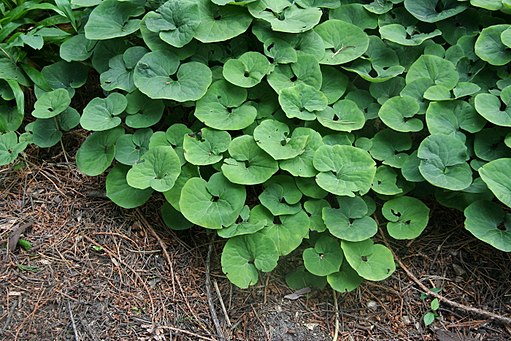 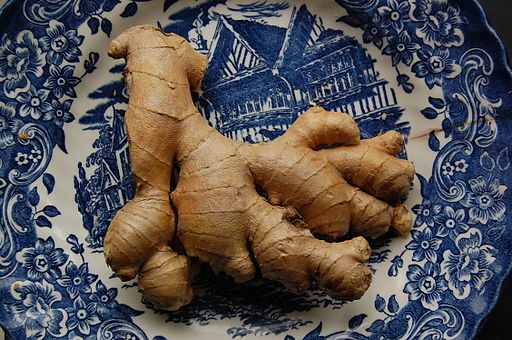 A ginger (Zingiber officinale) rhizome on a Delft blue European porcelain plate. Photo by Lucyin.
Of all the South Asian and East Indies spices that are well known to Europeans from earliest trading days, only ginger rewards the gardener who attempts growing it outside its native region or outside tropical climate zones without resort to expensive greenhouses. Start it indoors in late winter on a sunny windowsill and keep it there until mid-spring, when it should be safe to move it outdoors, but always with an eye toward nighttime temperature dips. In the fall, bring the potted plants back indoors and start harvesting baby ginger to last the winter while enjoying the beauty of an unusual houseplant with a tropical feel and a warm, spicy scent.
— Izzy