The Spirit of Giving

December 24, 2017 Editor
And the angel said unto them, Fear not: for, behold, I bring you good tidings of great joy, which shall be to all people.
For unto you is born this day in the city of David a Saviour, which is Christ the Lord.
― Luke 2:10-11, from the King James Version of the New Testament.

Just in time for Christmas, the Congress passed its giveaway to the rich known as the Republican tax reform package, and the Thief-in-Chief signed it into the law of the land. Afterward much merriment was enjoyed by them and their kind on the South Lawn of the White House, where boot licking was the order of the day. The corruption and depravity oozing from the swamp of Washington, D.C. is too disheartening to dwell upon at this festive season of the year.

Moving on from the fairy tale that the Republican tax plan does anything at all for anyone but the wealthy, there is the fairy tale that has taken hold in some quarters that the Nativity of Jesus Christ was devoid of political ramifications at the time or in today’s world, and that therefore Christmas should be devoid of politics. A straightforward reading of the Gospels should dispel those ideas. Herod the Great apparently had no illusions about the threat posed by the birth of Jesus to the political future of himself and his progeny. Even taking the Gospels at face value, the Nativity story is loaded with politics. 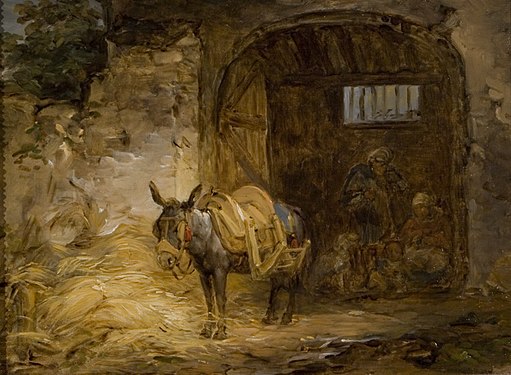 Saddled Donkey, a painting of the Nativity by Finnish artist Aleksander Lauréus (1783-1823). Donkeys were the mount of the lower classes when they could afford them, while the upper classes rode horses. In addition to providing transportation for the Holy Family to Bethlehem and then to a temporary exile in Egypt, a donkey would be the mount of choice for Jesus when he entered Jerusalem to complete His mission.
The dramatic tension of the story derives from the methods that the adult Jesus would teach to change people’s lives, with eventual political change as a by product, as opposed to the immediate political change some of His followers hoped for and most of His opponents feared. And it starts in the Nativity when individuals on both sides refer to Him as a King, though they mean different things by that term. Herod the Great was correct to see the birth of Jesus as a threat to his world, however he may have perceived that threat.

The relation of the Nativity as an innocuous story about a baby and some shepherds is alright for small children who cannot grasp the larger political and humanitarian dimensions of the birth of Jesus, but for adults to ignore the story’s radical aspects and still profess an understanding of it borders on cognitive dissonance. The events set in motion by the birth of Jesus and the principles he taught in His later ministry were a radical departure from the politics of His time. Blessed are the meek? The rich have no chance at salvation until they give away all they have? Those were not standard beliefs then, nor are they now, despite what many people profess.

There is no “War on Christmas”, at least not in the way some conservatives formulate it. That is nonsense made up by people who, if they were confronted by the real Jesus today, rather than their Jesus of fable, would be horrified and demand that He be hauled away to prison. Based on what He is quoted as saying in the Gospels, He certainly would not have been there last week on the South Lawn of the White House ghoulishly celebrating the passage of a tax bill that steals from the poor to give to the rich. He would not have sided with evangelical voters who deem the election of any Republican, no matter how cretinous, better than the election of a Democrat. Who are these people to make war on Christmas by celebrating the birth of a baby who preaches war, hate, and intolerance rather than peace, love, and understanding? That story feeds the needs of empire and is on the side of the Romans. That’s not the true Christmas story, and there’s nothing funny about it.
― Ed.