The Art of the Steal

November 17, 2017 Editor
The Republicans have passed their tax bill in the House of Representatives, and next week it goes to the Senate for a vote. This week the Senate Finance Committee held hearings on the tax bill, and Chairman Orrin Hatch (R-UT) became so upset with Sherrod Brown’s (D-OH) criticism of the bill and of Republicans’ motives in trying to pass it, that he exclaimed “Bullcrap!” in response. “Bullcrap” seems to be a favored light curse among Republicans in public life. The last time the term made headlines was when a self-absorbed Republican representative from Oklahoma used it earlier this year to rebuke some critical constituents.
Senator Brown’s criticism of the bill was entirely accurate and to the point, which of course was why Senator Hatch called it “bullcrap”. No need to respond with strong language like “bullcrap” if Senator Brown’s remarks weren’t close enough to the mark that they might alert the slumbering masses they were about to be screwed so that a handful of wealthy people and corporations could stuff even more money in their pockets at the expense of everyone else. Like any old master at shilling for wealthy patrons, Senator Hatch understands that the game is pretty obvious to anyone who is halfway paying attention, even mainstream journalists, but it lacks decorum to point it out to the rubes, who must always be led to believe there is something in it for them. 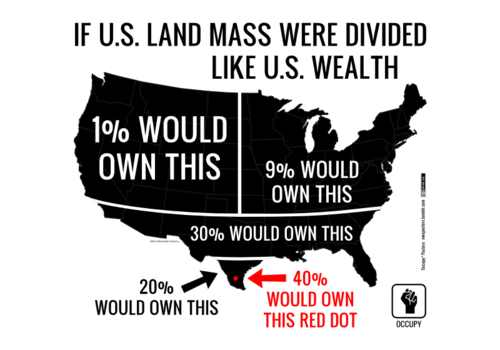 An illustration of income inequality. Map by Stephen Ewen.
The tax bill plainly enough steals from the poor and gives to the rich. The question remains whether the Republicans will get away with it, not only by passing it in the Senate, thereby making it the law of the land once the Capitalist-in-Chief signs it, as he certainly will, but in the 2018 congressional elections. Americans have notoriously short memories, at least for the dry details of economics.

Orson Welles as the plutocrat Charles Foster Kane in his 1941 film Citizen Kane campaigns for governor of New York with the usual palaver about the “working man.”

The conventional wisdom says people vote their pocketbooks, but that has been disproved over and over again in recent elections. The wealthy vote their pocketbooks, but since there are relatively few of them and therefore their actual votes don’t amount to much, they open their pocketbooks to their favored candidates, who then convince the rubes to get fired up about social issues like gay marriage, and never mind that in the long run they are voting against their economic self-interest. Getting screwed by the very people who profess to be your friends has been a time honored strategy that works, just ask the Native Americans not long after the first Thanksgiving with the Pilgrim settlers, and again and again to their misfortune through the years after that.
― Ed.