December 17, 2017 Vita Historia
Right wing media has its knickers in a twist the past week over the findings by a Boston University theater history professor of some racist performances of “Jingle Bells” from the mid-nineteenth century through the early twentieth century. The professor, Kyna Hill, was researching the origins of the song and trying to settle whether it was written by James Lord Pierpont in Medford, Massachusetts, or in Savannah, Georgia. Ultimately the song’s point of origin remained unclear, but during the course of her research Professor Hill discovered that the first performance was in 1857 at a theater in Boston, and the white performers wore blackface. 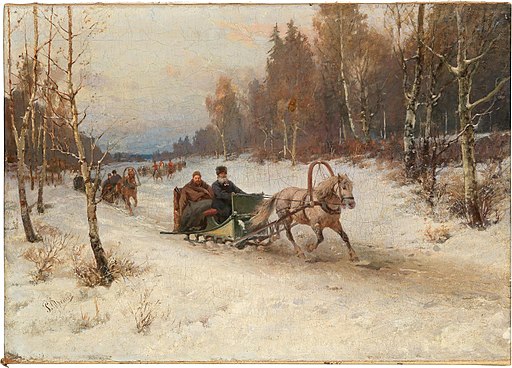 Sleigh Ride in Winter, a painting by Rudolf Frentz the Elder (1831-1918).
Professor Hill never claimed that the song as it is performed today is racist, but that did not deter some right wing media outlets such as Breitbart News from attributing that and other claims to her in an effort to paint her as an advocate of political correctness run amok. Right wing media enjoys fanning the flames of anger among its adherents, and since anger is the fuel of authoritarians, the readers and consumers of Breitbart News and other such outlets are always ready to flame up from a slow burn to a white hot conflagration. If there are not enough true stories available to fan their outrage, then the right wing will have to invent some false stories. The trendy term for that is “fake news”.
All this anger over ginned up controversies surrounding Christmas has been going on for a century, ever since the industrialist Henry Ford began muttering vaguely anti-Semitic remarks about a “War on Christmas”, as the right wing has since dubbed it. Ford thought Jewish owners of department stores were engaged in a conspiracy to undermine the Christianity of Christmas, all while lining their pockets by turning it into a largely secular, mercantile holiday. Never mind that no one twisted the arms of white Christians to engage in an orgy of spending for Christmas. The important thing was to direct right wing anger at an Other as American society turned away from the Currier and Ives mid-nineteenth century vision of Christmas (the same time as the early performances of “Jingle Bells”) to a more cosmopolitan, polyglot vision brought by the waves of immigrants in the late nineteenth and early twentieth centuries.

In Henry Ford’s day, Jews could be openly cast as the Other. After World War II and the Holocaust, that was no longer acceptable, and vilification of the Other settled on Communists, or Reds. The latest target of right wing objectification of an ideological and cultural Other is political correctness, a movement that started in the 1980s and has at times veered into ludicrously priggish stifling of dissenting opinion and alternative behavior, making it easy for the right wing to get outraged about it. Some people mock the excesses of political correctness, while right wingers alternate between mockery and spitting rage. Since political correctness is neither a religion, like Judaism, nor an entire political system, like Communism, the casting of its adherents as the Other by the right wing does not follow the same strand of unalloyed hatred.

Viewed by the right wing, and by some in the rest of society, advocates of political correctness are sociological scolds who are bent on taking away every last bit of cultural heritage of white European culture in America. The Nanny State description sums up the right wing view of the political correctness movement. When a story like the “Jingle Bells” one comes along then, right wingers are primed to pounce on it and vent their anger by putting words into Professor Hill’s mouth, making her a cipher for opinions she never expressed. In the “War on Christmas”, the right wingers proclaim “you are either with us or against us”. As a reward for her scholarship, poor Professor Hill got caught up in the culture war and got set up and knocked down as the right wing’s straw woman of the moment.
― Vita