In Comcast We Trust

December 1, 2017 Techly DoRight
Recently one of the minority Democratic members of the five person board of the FCC took the unusual step of writing an article for distribution in the popular press urging the public to sit up and pay attention to what the majority Republican members of the board are attempting to do with a vote on December 14 to repeal net neutrality rules. Jessica Rosenworcel asked the public to make a fuss with the FCC and with Congress to try postponing the vote until after public hearings. The vote will likely still take place on the 14th, and the outcome is certain considering the three to two Republican majority on the Commission board. The next step will probably see the rule changes challenged in court, with litigation taking years.

Congress could change how a regulatory agency like the FCC goes about its business so that it is less swayed by the variable political winds, but it appears there is little will in the Republican Congress to overrule the agency and tie it down to enforcing a net neutrality law enacted by legislators. There is some discussion in technology circles that introduction of 5G wireless service in the next few years will change the competitive landscape since 5G speeds and bandwidth will challenge the monopoly of wired service providers for the crucial last mile of service to customers’ homes. Until now, wireless internet service providers like Verizon and AT&T could not compete with wired providers like Comcast and Charter because their service was slower and not capable of handling the bandwidth demands of home users piling up GigaBytes of usage every month, usually by streaming video.

5G may indeed change the competitive landscape between a few large internet service provider companies as it rolls out, but customers will still have to deal with fast lanes and slow lanes imposed by whichever gatekeeper they sign up with for service. The proposed FCC rule changes will allow ISPs to charge different content providers varying amounts based on tiers of service, rather than providing equal access to all as they are required to do now since they are regulated as public utilities. 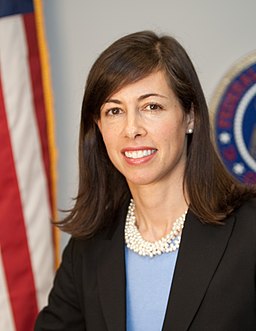 FCC Commissioner Jessica Rosenworcel, who began service on the Commission in 2012 and was confirmed by the Senate for an additional term in 2017.
When FCC Chairman Ajit Pai first proposed rolling back net neutrality rules early this year, Comcast said essentially “Trust us, we would never take full advantage of the regulatory opening to charge a premium for faster internet service.” As if anyone would believe them, particularly anyone who had any experience at all as a Comcast customer! Lately Comcast has walked back their earlier statement with some linguistic mumbo-jumbo that’s supposed to make people think they won’t be doing what they intend on doing when the time comes and they can get away with it, which will be to charge a premium for faster internet service and, as a bonus, no data caps! Comcast’s duplicity surprises no one, and their pleas for trust are laughable.

The best thing that can be hoped for by people who wish to keep a relatively open and inexpensive internet beyond December 14 is that the rule changes will be tied up in the courts for several years, and to some extent that will tie the grasping hands of some internet service providers who are eager to take advantage of the new rules to gouge content providers and customers. Beyond that, the best hope for a decisive, long term answer to the problem will have to come from Congress, which in the current environment does not appear possible, but may be so after a change in party dominance in Congress as a result of the 2018 election. The FCC needs to be more an enforcer of rules Congress makes, and less its own rule maker.
― Techly