November 21, 2017 Techly DoRight
When it comes to net neutrality analogies, many people opt for the internet superhighway one where there may be fast lanes and slow lanes or, on a content neutral internet, all lanes are equal. Since it’s hard to bring in the gatekeepers who set the rules for the internet on that kind of analogy, it might be easier to think of net neutrality or non-neutrality as related to a toll plaza, where the gatekeepers, such as AT&T, Verizon, or Comcast, charge different amounts and cause varying delays to the vehicles attempting to pass through their gates.
On a net neutral superhighway, the gatekeepers at the toll plaza charge roughly the same amount to every vehicle and pass them all through with equal alacrity. On an internet superhighway that is not neutral and grants wide discretion to the gatekeepers at the toll plaza, toll charges vary a great deal from vehicle to vehicle, and the gatekeepers might also hold up certain vehicles, making them late to their destination. 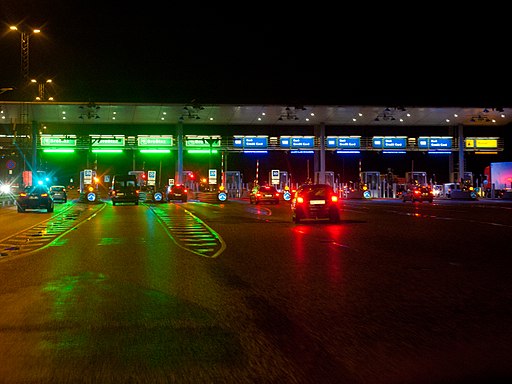 The Great Belt Fixed Link toll plaza in Denmark. Different colored lights indicate different payment methods. Photo by heb.
FCC Chairman Ajit Pai, after going through the motions of a public comment period through the summer on his proposed, Orwellian-named “Restoring Internet Freedom” gutting of the 2015 net neutrality rules, announced today that the FCC board of three Republicans and two Democrats will vote on rules changes on December 14. The fix is in, as it has been since early this year when Mr. Pai expressed his intention to overturn the 2015 rules, and there is little doubt how the majority will vote on December 14. It is still possible between now and then to bring enough public pressure to bear on Congress for that body to influence either the FCC board vote, which is not likely, or put in motion legislation to override FCC rules on rescinding net neutrality, which is the more likely outcome, if there is to be a positive one at all for neutrality advocates.

Regulation of internet access is too vital to leave up to the unelected five member board of a regulatory commission. The current FCC board has also recently demonstrated its irresponsibility to the country at large when it did away with rules preventing monopolization of local media markets by a single company, recklessly opening the gates to allow Sinclair Broadcasting to consolidate its control across the country.

In the 1974 film Blazing Saddles, directed by Mel Brooks, the citizens of Rock Ridge set up a toll booth to slow down the bad guys coming to destroy their town. Warning: foul language.

Congress could put an end to FCC favoritism toward big business by passing legislation, instead of allowing the FCC board to vote on rules after the formality of a meaningless public comment period, since the board Republicans will almost certainly vote against net neutrality despite the majority of public comments in favor of it. Congress is also beholden to big business, but at least it retains some ability to bend to the public will. As it stands now, after the December 14 vote the new rules will likely get challenged in court, and the legal struggle will eat up years, and all the while the internet gatekeepers will make fortunes extorting internet users who need to pass their toll booths.
― Techly