October 31, 2017 Vita Historia
The Monarch butterfly, Danaus plexippus, may not seem to have any connection to Halloween other than its orange and black coloration, but in Mexico, where they overwinter, the butterflies are hailed as the spirits of friends and relatives who have died in the past year and are returning at the time of Halloween for one last visit with the living. The important dates for Mexicans, and indeed for many Hispanic peoples, are October 31st, and November 1st and 2nd, known as The Days of the Dead, or Los Dias de los Muertos in Spanish.

From the 1955 film The Night of the Hunter, Robert Mitchum as a murderous and greedy self-anointed preacher sings “Leaning on the Everlasting Arms”, while Lillian Gish as Rachel Cooper protects the children inside her house from harm.

Before the Spaniards arrived in Mexico, the Aztecs and other indigenous peoples believed Monarch butterflies were returning human spirits. After the Spaniards imposed Catholicism throughout the region, the Native Americans transposed some of their ancient beliefs onto the new religion. In the case of the Monarch butterflies, since their annual migration brought them to their winter home in the mountains of Mexico more or less at the end of October and the beginning of November, it was a simple matter for Native Americans to meld their traditional celebration of the dead and honoring of the return of the butterflies at that time of year with the Christian holidays of All Saints’ Eve (Hallow e’en, or evening) on October 31st, All Saints’ Day on November 1st, and All Souls’ Day on November 2nd.

This mixing of indigenous traditions with Christian beliefs and holidays follows a pattern seen in Christian communities throughout the world. In Ireland, for instance, where the version of Halloween celebrations started in a way that most Americans would recognize, the Christian holidays were overlaid on existing Celtic harvest festivals and honoring of the dead. It seems in the northern hemisphere at least, where the harvest occurs approximately in September, October, and November, that honoring the dead at the same time was commonplace. People prayed to their honored dead for a good harvest, and when the work was done they often symbolically shared the bounty with their dear departed at altars in the home. It was a short step for the Church to substitute, or merely add, saints and martyrs to the list of honored dead. 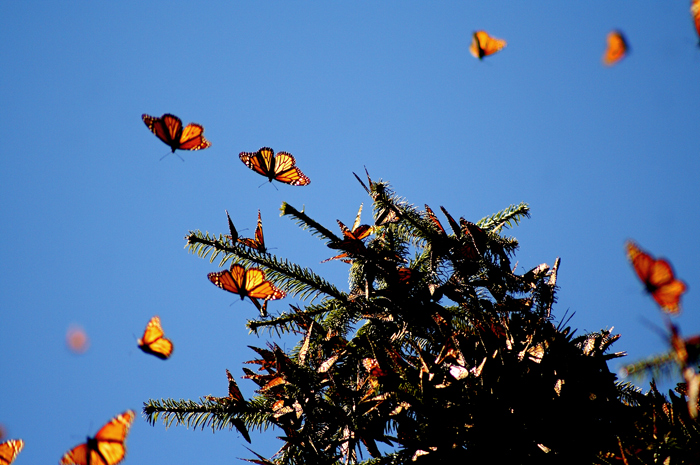 Overwintering Monarch butterflies in November 2005. Photo by Samuel from Toluca, Mexico.
Monarch butterflies, meanwhile, have troubles beyond being Halloween symbols for human beings. Habitat loss, pesticides, and destruction of food sources have all led to a general decline in their numbers over the last few decades. They are not yet under the protection of the Endangered Species List, and they may not be anytime soon given the hostility toward environmental protection of the current presidential administration.

The ending of the 2010 version of True Grit, a film by Joel and Ethan Coen, with Iris DeMent singing “Leaning on the Everlasting Arms”.

It is more important than ever, therefore, for individuals to do everything they can to assure the continued survival of Monarch butterflies, rather than relying on governmental entities to take the lead. It’s not hard; the butterflies don’t ask for much. Leave some tall weeds standing at the edge of a property rather than mowing absolutely everything down to half inch high grass. Among those tall weeds, plant or encourage some milkweeds as fodder for the caterpillars, and some wildflowers as nectar sources for the adult butterflies. Stop using pesticides and herbicides, at least the general purpose ones that kill all insects or all vegetation. Pay attention, be observant and respectful, and in the end enjoy what you have helped along in a way you could not possibly enjoy yet more grass or asphalt. The spirits are watching.
― Vita