How the Mighty Have Fallen

October 22, 2017 Vita Historia
Sears, once the largest retailer by sales volume in the country, has been in decline for the last twenty years and is on its way out of business. Some of its competitors in the brick and mortar and catalog sides of retail merchandising have either already gone out of business or are also on their way out. Sears failed to keep up with the online retail revolution, and a look around its sales website indicates that the company still doesn’t have a handle on it. Sears closed up its famous catalog in 1993, and since it never established itself online, it was left with brick and mortar stores which are not doing well. 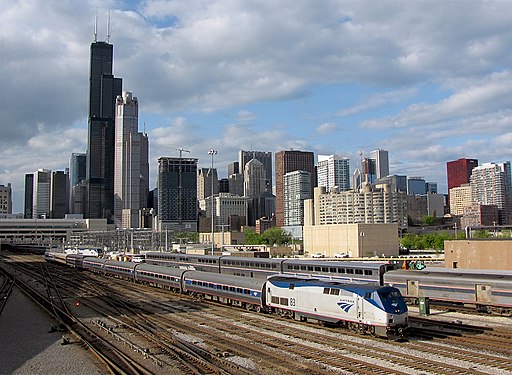 The Amtrak train The Cardinal departs Chicago in May, 2009, for points east. The Sears Tower, the tallest building in the skyline, was renamed the Willis Tower in 2009 by the Willis Group as part of its lease agreement. Photo by Russell Sekeet.
Throughout the first two thirds of the twentieth century, Sears was such a huge merchandiser that it accounted for about one percent of all retail sales nationwide. It was the Amazon.com of that time, which was no small feat considering the supply chain difficulties imposed by an infrastructure that would not become truly nationwide until the 1950s with the building of the interstate highway system. Sears made its name by using its catalogs to reach under served rural customers at a time when the majority of people lived outside of cities. Now online retailers can reach anyone with an internet connection, and shippers deliver directly to the consumer’s doorstep.
It was at this time of year, late summer or early autumn, that Sears used to issue its Wish Book, a shortened version of its catalog, with an emphasis on Christmas gift items. One of Sears’ competitors, Macy’s, still kicks off the Christmas shopping season by sponsoring a Thanksgiving Day parade in New York City, though it has also been closing stores around the country. The 2008 recession accelerated the decline of the big nationwide department stores after a slow slip in sales since the 1990s. Specialty stores with a national or regional presence, like Radio Shack and Circuit City, have also either shut down or are close to doing so. What’s most often left then for Christmas shoppers visiting a physical store are the big box retailers like Walmart and Target.
Or people could patronize locally owned shops. The prices may be higher because the small shops don’t have the supply chain advantages of their much larger competitors, but the local small business gives back to its community. In that sense, the two types of stores should not even be considered competitors. Over there are the big box retailers selling goods cheaply, but also taking advantage of communities with unethical employment and supply chain practices. And over here are small businesses that are answerable to the community, because without local support and good word of mouth they are doomed to fail. 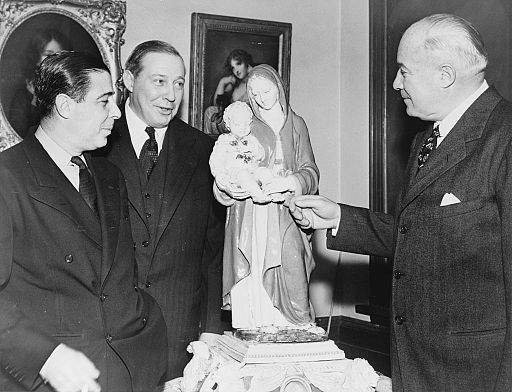 Left to right: Adam Gimbel, Frederic Gimbel, and Bernard Gimbel looking at a Luca della Robbia (1400-1482) statue of Madonna and Child, from the art collection of William Randolph Hearst. Parts of Hearst’s collection were sold at the Gimbels department store in 1939-1940. Gimbels had stores in the northeast and the midwest, and a prized location next door to Macy’s in Herald Square in New York City. Photo by Edward Lynch of the New York World Telegram & Sun.
Edmund Gwenn stars as Santa Claus in the 1947 version of Miracle on 34th Street. The film’s setting is Macy’s department store in New York City.

It could be that the failure of the old retail giants like Sears will prompt renewed interest in shopping at local stores. Online retailers and a few big box retailers have already usurped much of Sears’ more than one century old business model. Sears and J.C. Penney and a few other large department stores have anchored enclosed suburban shopping malls since they first started appearing in the 1950s and 1960s. Now that those stores are declining, perhaps small, locally owned shops will pick up more business. That would be a welcome development, and it might eventually boost Small Business Saturday to a level competitive with Black Friday (it’s antithesis is Buy Nothing Day) and Cyber Monday. Like it or not, Christmas has been a commercial proposition in America for a long time now, and if small businesses can bloom from the ashes of the old retail giants, then at least some good will have come from that mercantile aspect of the year end holidays.
― Vita