September 5, 2017 Vita Historia
Hurricane Harvey, a category 4 storm at landfall in Rockport, Texas, on August 25, has moved on finally after causing catastrophic damage, mainly due to flooding, in southeastern Texas and southwestern Louisiana. Following on Harvey’s heels is Hurricane Irma, currently a category 5 storm entering the Caribbean Sea, with many Caribbean islands, large and small, in its sights as it makes its way to Florida later in the week. Beyond that Irma’s track is uncertain, and it could affect communities anywhere from the eastern Gulf Coast to the southern portion of the Eastern Seaboard.
With the various early warning detection systems in place today and improvements over the years in computer modeling of forecast tracks, predicted landfalls of hurricanes has become better than guesswork and moved on to science. Until the World War II era and the development of radar, detection of hurricanes and predictions about their track relied largely on observations made by knowledgeable shipboard weather watchers reporting to shore stations and the tracking by shorebound observers of weather systems that might influence a hurricane as it approached land. Early warning of hurricanes in the first half of the twentieth century was limited to a few days, with an uncertain track left up to guesswork until practically the day before landfall. 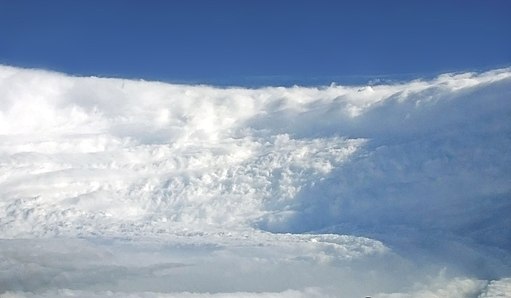 View of the eyewall of Hurricane Katrina taken on August 28, 2005, as seen from a National Oceanic and Atmospheric Administration (NOAA) WP-3D Orion hurricane hunter aircraft before the storm made landfall on the United States Gulf Coast.
Before the twentieth century, prediction of hurricanes was further limited to personal observations of weather conditions as the storm approached, because ships at sea were largely driven by wind power and were not as likely as coal, steam, or oil powered ships of later times to arrive in port well ahead of a storm and warn of its approach. People relied on observations of certain types of clouds and of the drop in barometric pressure, however they measured it, to give them indications of an approaching storm. Residents along the shore might have a day or two warning to head inland for higher ground. Absolute amount of fatalities could be high during the storm because of the short notice, but values of property damage were low because there were fewer people living along the coast and because they had not invested millions and billions of dollars in homes, hotels, and infrastructure to be destroyed.

USA hurricane weather warning flags. Drawing by Herostratus.
That formula has been steadily turned upside down through the twentieth and twenty-first centuries. Property damage amounts from hurricanes have skyrocketed due to the enormous increase in development close to the sea, while fatalities in proportion to total population have dropped dramatically due to warning times of several days to a week or more. Even if people do not evacuate the area entirely, they have sufficient warning time to load up on supplies and defenses to help them weather the crisis in place. In the past, shore residents did not have that luxury. To find a similar situation today of short warning of dangerous weather contributing to high fatalities, one would have to look at tornadoes, a highly localized phenomena when they do crop up.
No one who has ever survived the experience of a hurricane or a tornado or other severe weather disaster can ever dismiss the further possibility of such events lightly. They know in their guts how frightening and life-changing those events can be. The poor especially, as they do in all things in life, suffer disproportionately. The poor cannot afford to flee to higher ground. The houses the poor live in, where they might choose to shelter in place in order to ride out storms, are often flimsily constructed and the first to be destroyed by high winds or high water. Tornadoes are not magically drawn to trailer parks, it’s just that there is where the damage happens that draws the rubberneckers running the local television news stations.

We live in an age when severe weather events are becoming more common, regardless of whether or not an ideologically motivated minority continues to argue the point without reference to facts. Preparing for severe weather, however, has never been a better proposition for most of humankind over what it was in past generations. Ironic that our reliance on technology, which has brought us to the brink of climate destruction, could also serve to save us from its worst effects, at least in the short term.
― Vita