A 50 Percent Chance of Stupidity

June 9, 2017 Isidore Gnome
Last week, upon returning from Europe and announcing that the United States would withdraw from the Paris Climate Accord, Supreme Leader was supposed to have remarked to his companions over lunch after yet another weekend round of golf, “They can’t even get the weather report right, so how come they think they can get that right?” He was conflating weather with climate, a common mistake for laymen, but an unfathomable lapse for someone who has the best science at his fingertips, if only he had an interest in tapping it.

Stupidity may not account entirely for Supreme Leader’s climate change denial, nor for that of his core supporters or other conservatives, for denial of climate change does appear to be a trait of conservatives. Cupidity plays a part, in that the fossil fuel industry, a primary contributer to global warming, does all it can to deny it and thereby preserve its profits, much like the tobacco industry fought against cancer research. Until a recent study showed otherwise, people may have thought ignorance of the facts determined the stance of deniers. The study showed instead that deniers had as much access to the facts as anyone else, but they make the facts fit their predispositions on the issue, a trick which they can accomplish more easily with a long term problem like climate change. The effects of climate change are unfolding over a period expected to last well over a lifetime, into the lives of children and grandchildren, unlike the effects of smoking, which could be felt within a single lifetime.

Biloxi Blues, a 1988 film adapted by Neil Simon from his play, and directed by Mike Nichols, is a semi-autobiographical reminiscence of Simon’s Army days during World War II. In this scene, Christopher Walken as the drill sergeant uses the recruit played by Matthew Broderick to make a point to the platoon that they are all in this together, and an action or failure to act by any one of them affects them all. Warning: foul language.

The problem comes with the understanding that a flexible view of the facts does not change the facts, it only delays grappling with the inevitable. We may tell ourselves that the Chinese have perpetrated global warming as a hoax in order to subvert America’s competitive advantage, but that doesn’t alter the fact that it’s getting hotter, and that Americans are contributing more than their fair share to the problem while contributing less than their fair share to the solution. If we like, we may puff away like chimneys in order to keep pace with the Chinese, and then we can all collapse together, wheezing and clutching our chests, our insides poisoned.

That is not an entirely accurate analogy for the effects of climate change, however, which are longer term and more widespread than one individual’s smoking habit. And that is what makes it hard for some people to acknowledge, making it a failure of imagination. If they won’t accept on their own account that it’s getting hotter now, maybe they will accept that unless they pitch in to help solve the problem, or at least stop obstructing progress, then their children and grandchildren will feel the heat to a degree that there’s no denying. Until climate change deniers reach that acceptance, everyone else has to do what they can to stall global warming without any further delay. If the Ignoramus-in-Chief won’t lead on the issue, then it’s up to everyone else, starting with the states, to act on it and steer around the obstacles.
― Izzy 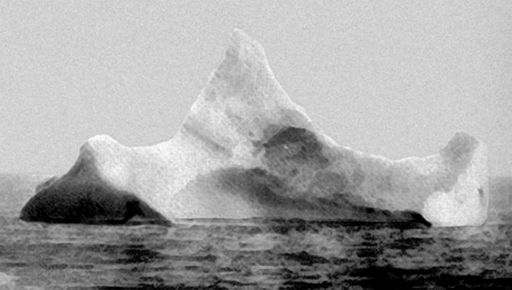 The iceberg suspected of having sunk the RMS Titanic. This iceberg was photographed by the chief steward of the liner Prinz Adalbert on the morning of April 15, 1912, just a few miles south of where the Titanic went down. The steward hadn’t yet heard about the Titanic. What caught his attention was the smear of red paint along the base of the berg, an indication it had collided with a ship sometime in the previous twelve hours. This photo and information was taken from Unsinkable: The Full Story of RMS Titanic, written by Daniel Allen Butler, Stackpole Books 1998. Climate change deniers see an iceberg and say there is no global warming because there is still ice; others see an iceberg floating free in the shipping lanes and say “Watch out!” The crew of the Titanic, of course, didn’t see the iceberg at all.
Climate America, Americans, Army, Biloxi Blues, Chinese, Christopher Walken, Climate Change, Conservatives, Europe, Fossil Fuels, Global Warming, Golf, Ignoramus-in-Chief, Matthew Broderick, Mike Nichols, Neil Simon, Paris Climate Accord, States, Supreme Leader, Tobacco Companies, United States, Weather, World War II