Too Much of a Good Thing

August 22, 2017 Isidore Gnome
Sugar can be derived from numerous plants, including beets, corn, and the fruit of trees, but it has come into its own since the Middle Ages in Europe as the refined product of the sugarcane plant, a perennial grass. The plant originated in New Guinea, and from there traders introduced to Asia, where it eventually found its way to southern Europe by way of Arab merchants. As noted from its origin, the plant grows in tropical or sub tropical climates. Europeans quickly developed a taste for refined sugar, but since the plant would not grow well in Europe or northern Africa, they needed to find either another source or another place to grow, or forever be at the mercy of Arab merchants, who kept the price high.

When European explorers stumbled upon the New World in their search for a trade route to the Far East that bypassed Arab middlemen, they were interested in exploiting sugar resources as much as spices. The tropical and sub tropical bands of the New World – the Caribbean, much of eastern South America, Central America, and the far southeastern portion of North America – turned out to be well suited for raising sugarcane. The problem was finding a suitably cheap labor source for the backbreaking and dangerous labor involved in sugarcane cultivation as well as refinement. The Europeans, after exhausting the Native Americans as a labor source, turned to Africa as a source of slave labor.

There were other plantation crops that Europeans raised in the New World exploiting slave labor, such as tobacco (a plant native to the western hemisphere) and cotton, but sugar was the big money maker for them, the linchpin of Atlantic trade from the 1500s well into the 1800s. Sugar grown on plantations in the New World traveled, some in the form of rum, to northeastern ports of North America and then on to Europe, where it was traded for manufactured goods; some of the manufactured goods then were traded in Africa for slaves, who were loaded onto ships destined for plantations in the New World, their voyage across the Atlantic being known as the Middle Passage of this triangle of trade. Some didn’t survive the voyage, and of the ones who did, many suffered abominably under harsh conditions in the sugar growing regions and elsewhere. 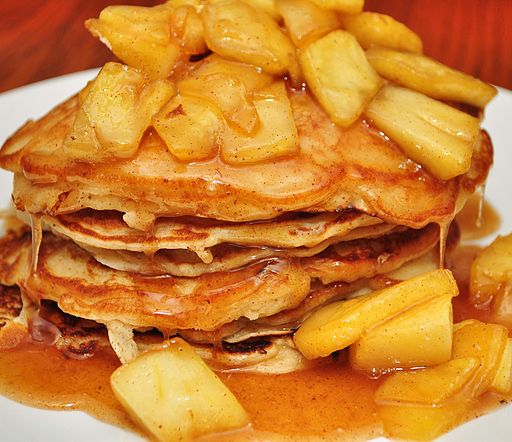 Pancakes with syrup, or syrup with pancakes? Photo by jeffreyw.
Hundreds of years later, sugar is still exacting a toll from poor black people, as well as poor and working class people generally. The European quest for cheap sugar succeeded all too well. Now it’s found in far too many supermarket foods and beverages, where in the case of processed foods it masks the loss of wholesome flavors. Sugary beverages like soda and many fruit drinks are especially egregious sources of the endocrine disrupting carbohydrates present in refined sugar that can lead to obesity and type 2 diabetes. These processed foods are easy to prepare and are relatively cheap and, because of the sugar in them, to some people they taste good enough.

“Big Rock Candy Mountain”, first recorded by Harry McClintock in 1928, is about a hobo’s idea of paradise. McClintock claimed to have written the song in 1895, based on tales from his youth hoboing through the United States. McClintock’s 1928 recording was used by Ethan and Joel Coen at the beginning of their 2000 film, O Brother, Where Art Thou?.

People could cut back their consumption of processed foods, and certainly they could drop sugary sodas and fruit drinks out of their diet and not lose any essential nutrients. People can use will power and self control, even though there is evidence that sugar’s effects on their health are more insidious than industry mouthpieces would have everyone believe. People can do all those things. But they don’t. Why not?

What if crack cocaine were as cheap as sugar? How about cigarettes? Opioids? What levels of consumption would we encounter then among the general population, and among the poor and working classes specifically? All those substances stimulate pleasure centers in the human brain, just like a good hit of sugar does in a smaller way, and all are ultimately destructive in high enough doses. Is sugar as destructive as those other addictive substances? No, not in the short term, and it would be ridiculous to equate a cookie with a hit of cocaine. In the long run, however, over the course of ten, twenty, or thirty years, sugar consumption at modern American levels of a hundred pounds or more per person per year is proving destructive enough. Time to turn some of that exhausted soil in the tropics over from growing monocultures of sugarcane for export to growing fruits and vegetables the locals could consume for themselves. We could easily cut back from two or three lumps of sugar to just one.
― Izzy