Worse than Foot in Mouth

August 18, 2017 Vita Historia
The pejorative expression “liberal media” has become a time-worn truth for some people after it has been repeated often enough, mostly by themselves. To them, attributing a news story to the “liberal media” is as good as saying the story is worthless. Their listeners are meant to take at face value the assertion that the media has a liberal bias, because they themselves never question the phrase. Of course the media has a liberal bias, because everyone says it does.

At least everyone within a certain circle says it does, and the people within that circle repeat the formula ad nauseum. Citing facts to these people about how the major media outlets are controlled by as few as a half dozen corporations, all of them concerned with promoting business rather than any leftist agenda, has no effect on them. They are addicted to the drug of blaming the faults of their right wing leaders on a mythical “liberal media”. Individual reporters within the big media corporations often lean to the left, but it does not follow that their personal views find their way into print or onto television or radio. The editors, who have their ears tuned to the desires of their corporate bosses, would not allow it, and they set the parameters for what will be in a news story and, more importantly, what will not. 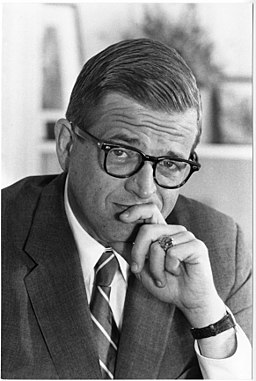 Chuck Colson (1931-2012), officially White House Special Counsel in the Nixon administration, but unofficially the director of dirty tricks. After being sent to prison for seven months for his role in the Watergate scandal, he got religion.
Consumers of news media have no idea what is being left out, what questions are not being asked, and what assumptions are not being challenged. It is what a news organization leaves out that determines its political bias, more than what it releases for consumption. Yes, a newspaper may endorse the Republican or Democratic candidate for office, but what about the idea that neither candidate represents with sincerity any interests other than those of the business class that donated the largest sums to their campaigns? What about in the run-up to war in Iraq in 2003 the reality that there was very little skepticism of the Bush administration’s reasons for going to war from supposedly liberal media outlets like The New York Times and the Columbia Broadcasting System (CBS)? To persist in labeling such organizations “liberal media” belies not only a willful ignorance of the facts, but a bent in political philosophy that is so far rightward it makes Rush Limbaugh appear centrist.
Before the 1950s, major media outlets were seen for what they were then and still are today – centrist or right-leaning organizations that were interested in a healthy bottom line, without investigating too deeply into the feathered nests of the owners’ wealthy friends in government and business. Starting in the 1950s with critical reporting of racial atrocities in the South, and continuing through the 1960s and 1970s with critical reporting on the Vietnam War, the Watergate scandal, and the CIA, the major media strayed from it’s generally cozy relationship with the powers that be. It was an anomalous twenty to thirty years, and the Nixon administration sought to rein in the press using, among other tools and dirty tricks, the “liberal media” propaganda lie, repeated often. By the 1980s and the Reagan administration, a cowed press corps had reverted to previous form. By 2003, it would be difficult to distinguish the uncritical cheerleading among the press corps for the Iraq War from the rah rah press reports at the beginning of the Spanish-American War a little more than a hundred years earlier.

Harvey Korman and Slim Pickens brainstorm on the kinds of people they need to help them destroy the fictional western town of Rock Ridge in Mel Brooks’s 1974 film Blazing Saddles. No mention of any “very fine people” among them, however. Warning: foul language.
The “liberal media” excuse is a handy one, and some people will cling to it no matter how badly the current Oval Office occupant behaves or how heinous the words coming out of his mouth or from his Twitter tirades. Anyone who continues to excuse him by blaming the “liberal media” for slanting the words the president himself uttered in response to the events in Charlottesville, Virginia, last weekend, is in denial about the situation and is suffering from cranial rectumitis so severe that no one else should have to listen any longer.
― Vita 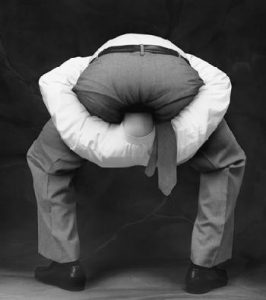