People hear what they want to hear. Actual mishearing of a word or phrase is called a mondegreen, and commonly occurs when listening to song lyrics. Choosing to interpret words in a way you prefer rather than in the way words were meant by the person using them has no special term. Perhaps willful stupidity fits. It goes beyond inferring something in a self-serving way, which is behavior children adopt in order to do what they want even though it goes against a parent’s wishes, express or implied. More likely it is laziness in the form of confirmation bias. We hear what we want to hear because we are too lazy to dig deeper to find out things on our own. 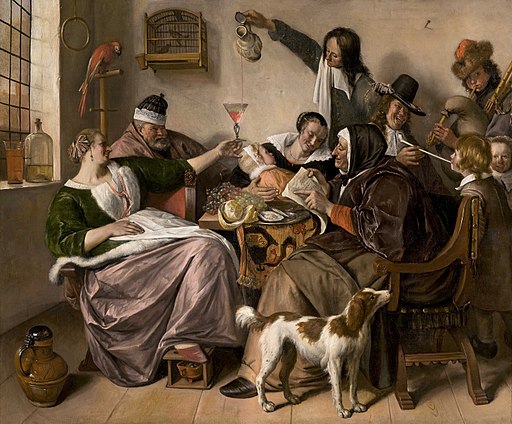 A circa 1665 painting by Jan Steen (1625-1679) titled The Way You Hear It, Is the Way You Sing It.
Some people have adopted the attitude that the media is liberal, despite all evidence to the contrary, and therefore treats the Oval Office Doofus unfairly. The Doofus himself has adopted this attitude. He tweets, he says, in order to bypass the media and speak directly to the public. He tweets stupid and callous remarks. That, somehow, is still the fault of the media, because they make him do it in response to their stupid and callous stories about him.

The most cowardly thing in the world is blaming mistakes upon the umpires. Too many managers strut around on the field trying to manage the umpires instead of their teams.

Poor Doofus. He can’t catch a break from the dastardly liberal media, which behaves toward him at all times like Snidely Whiplash. He is not, as you may suspect, Dudley Do-Right in this melodrama, but whimpering Nell Fenwick, tied to the railroad tracks by Snidely. It is the core supporters, the ones for whom he (Doofus as Nell) can do no wrong, whose tweets are not the insensitive bleating of a sociopath, but cries for help, it is they who take on the role of Dudley, declaring heroically “I’ll (we’ll) save you Nell (Doofus)!” as they pummel some reporters.

Everyone is entitled to their opinion. And everyone else, if they determine someone arrived at an opinion without reference to the facts and solely out of a lazy or misguided reliance on prejudices, is entitled to discount that opinion. In the future, pay attention – you might learn something.
― Ed.

In the event you hear a mondegreen in this song, you can find the lyrics here.