August 13, 2017 Isidore Gnome
The evening before the “Unite the Right” rally in Charlottesville, Virginia, white supremacist marchers wound their way across the Grounds of the University of Virginia (UVA) in a torchlight parade. That demonstration caught city and university officials by surprise. The “Unite the Right” rally organizers had a permit from the city for a demonstration on Saturday, August 12, at a city park, ostensibly to protest the imminent removal of a statue of Confederate General Robert E. Lee. They made no formal arrangements with the university for their torchlight parade the evening before, on August 11. It was at the rally on UVA grounds that the marchers showed their true colors. 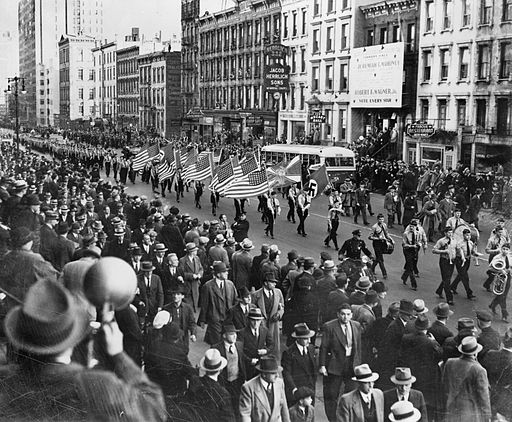 German American Bund parade in New York City on East 86th Street on 30 October 1939; photo by New York World-Telegram and the Sun staff photographer.
Chanting “Blood and Soil” and “Jew will not replace us”, neither of which bear the slightest relationship to Robert E. Lee, the Confederacy, or the often disingenuously used slogan “Heritage not Hate”, but everything to do with Nazism, the marchers dropped any pretense they were gathered from around the country to promote a positive program of support for white culture in general, and for southern heritage in particular. They were gathered to instill fear and to vent hatred in the manner of the white supremacists of Nazi Germany before them.
The “Blood and Soil” slogan was telling because it came directly from the Nazi policy of promoting pure Aryan blood heritage over all others, and exalting ties to the native land, or soil, of which the Nazis had an expansive vision, since it included the grain fields of the Ukraine. That expansionism, seen by the Nazis as their birthright, was known as “Lebensraum”, or Living Space. All that has not even a tenuous relationship to issues of southern pride, for which the marchers were supposedly gathered. The anti-Semitic slogan speaks for itself.

The opening scene of the 1962 film To Kill a Mockingbird, introducing a farmer, Mr. Cunningham, portrayed by Crahan Denton, when he visits Scout and her father, the lawyer Atticus Finch, to partially repay his debt for Mr. Finch’s legal help.

The white supremacists gathered in Charlottesville this past weekend had no business being there other than the convenient rallying point of the removal of symbols of the Confederacy from public spaces. They wanted to vent their own petty grievances and hatred against a culture that is leaving them behind. They pretend that America was and is theirs to do with as they please, and that everyone else who has other ideas is an interloper and an enemy to be intimidated, beaten, and ultimately disposed of. The Native American tribes would have something to say about who belongs here and who are the interlopers. Hitler, for whom the American theft of land and expulsion and genocide of native peoples served as a model for what he wanted to accomplish in the Ukraine and in eastern Europe, would no doubt support this past weekend’s white supremacist warriors.

Later in the film, Atticus Finch, portrayed by Gregory Peck, holds off a lynch mob intent on dragging out of jail his client, a black man named Tom Robinson accused of raping a white woman. Mr. Finch receives inadvertent but effective help from Scout, portrayed by Mary Badham, who singles out Mr. Cunningham from the crowd, talking to him about personal matters like his property entailment. Mr. Cunningham is embarrassed by Scout bringing up his financial embarrassment in public, the matter which Mr. Finch has been helping him resolve, and Mr. Cunningham can no longer remain a faceless part of the lynch mob. Unlike the white supremacist mob gathered in Charlottesville, chanting “Blood and Soil”, Mr. Cunningham was a true man of the soil, and he was tied by family blood to his entailed property in rural Alabama during the hard scrabble times of the Great Depression. He was also capable of feeling shame, and therefore capable of redemption.

Robert E. Lee, the forgotten man supposedly at the center of all this, would have been befuddled by the slogans expressed at the torchlight rally. Thomas Jefferson, whose statue in front of the Rotunda at UVA was the focal point for the end of the evening’s march, would have been disgusted by the slogans and the people expressing them. Yes, both men owned slaves and were in that sense white supremacists themselves, but they had a grander idea of the world than to shrink it down to hating others as they might have hated themselves. It would have been beyond their dignity to portray themselves as victims and whine about the erosion of their privileged position, as those people supposedly gathered in Charlottesville to worship their graven images have done. Those people have a more fitting recipient for their craven idolatry, a man who died amid the ruins of his bigotry in Berlin on 30 April 1945.
― Izzy