August 15, 2019 Editor
What kind of English word is “Winnemucca”? How about “taco”? “Fond du Lac”? People who get bent out of shape over other people speaking languages besides English while out in public in this country probably fail to realize how many English words have their origin in other languages. As much as 30 percent of English words are borrowed from the world’s thousands of languages. It would be difficult or impossible for the average English speaker to use only Anglo-Saxon words.
In the United States especially, where nearly 100 percent of the population comes from elsewhere in the world, the English language is a polyglot mixture made up of additions from languages everywhere, and yet it stands apart in its diction, its spelling, and in other ways. Place names preeminently use some version borrowed from the many Native American languages that have all but disappeared otherwise. What does it mean to send somebody back where they came from, when almost everybody came from somewhere else at one time? Send them back where? To Ohio? To Florida? If we go back far enough in time, almost everyone will have to leave, and the Native Americans – what is left of them – will no doubt feel immense relief, as of an oppressive burden lifting away from them. 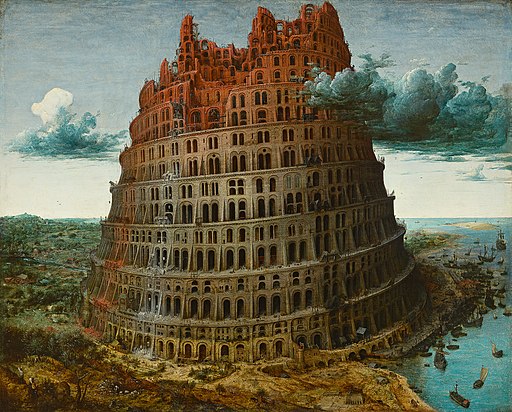 The Tower of Babel, a painting by Pieter Breugel the Elder (c. 1525/1530-1569).
Exclusionary talk is loco chauvinism. It is meshuga, and yahoos who go on about sending others back where they came from are clearly non compos mentis. They should examine their own origins, which in the latest generation or two or three might be in places like Tulsa, Santa Fe, Tennessee, or Baraboo, but going back further could be traced to Scotland, or Frankfurt, or Sarajevo, and ultimately to Africa. White folks weren’t always white, and anyway no deity ever descended from the heavens to declare whiteness a superior trait. It only matters to people who are terrified of losing their imagined superior place in society, and must have Others to look down upon. Ordering Others to speak English when they are conversing among themselves is not only high-handed, it ignores how immigrants have enriched and informed English itself with words and expressions from everywhere. The proper remark for an English-only speaker to make in that case, if any is necessary at all, is gracias, or merci, or danke, or mahalo, or arigatô, or . . .
— Ed.