October 7, 2018 Vita Historia
“Render therefore unto Caesar the things which are Caesar’s; and unto God the things that are God’s.”
— Words of Jesus Christ quoted in Matthew 22:21, King James Version of the Bible. 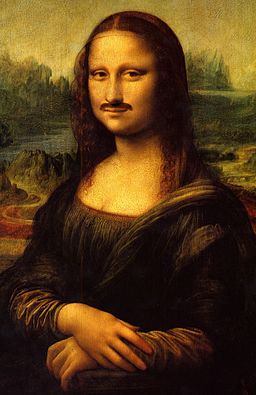 Leonardo da Vinci’s (1452-1519) Mona Lisa, with digitally added mustache. Derivative work by Perhelion.
This past Friday evening at a Sotheby’s art auction in London, the English graffiti artist Banksy remotely activated a shredder hidden within the frame of his painting Girl With Balloon moments after it had sold for one million British pounds. The lower half of the painting shredded, and there is some question now about the status of the sale and whether Banksy’s vandalizing of his own painting will render an even greater value for it.
Discussion of an artwork’s value outside of its aesthetic appeal is a reminder that for the rich who can afford to pay tremendous prices for art the value lies more in other, equally idiosyncratic, considerations than in its aesthetics. For the rich, art is an investment and a step on the ladder of social climbing. They may not find a particular piece they buy aesthetically appealing whatsoever. The essential thing is that enough other important people find an artwork appealing so that its value is driven up, checking off the boxes for high return on investment and an increase in high society credentials for its new owner. The artwork itself may languish in a warehouse after sale rather than go on private or public display.
The investment value of an artwork is, like money itself, largely artificial and sustained by the beliefs of the people who hold it or wish to hold it. No one can eat art, any more than they can eat money, nor can they grow food on it like they could on land, nor withdraw food from it as they might withdraw fish from the sea. It has no monetary value unless enough people believe it does. Aesthetic value, on the other hand, is almost entirely in the eye of the beholder, though some people may in their appreciation of art be too dependent on the opinions of “experts”. For an extreme case of wishful thinking brought on by peer pressure, look to the Hans Christian Andersen tale “The Emperor’s New Clothes”. 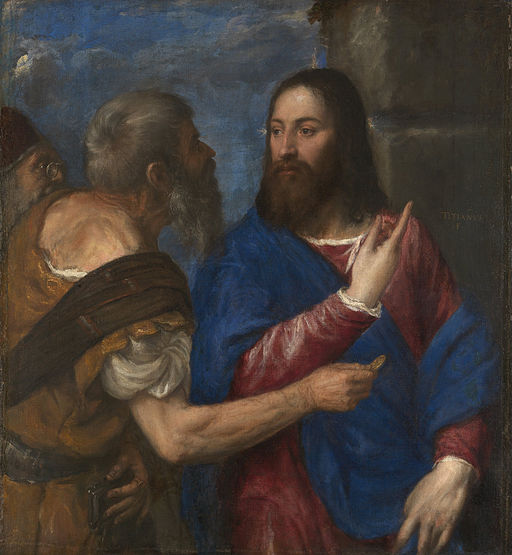 The Tribute Money, a painting by Titian (1490-1576).
Before the Renaissance, art was for decoration of public spaces and the homes of the rich, and for religious instruction in places of worship since most people were illiterate and did not receive their education from books. The names of very few medieval and ancient artists have come down to us along with their works. That changed with the Renaissance, when artists such as Leonardo, Michelangelo, and Raphael acquired reputations beyond their immediate patrons among the rich and powerful. Note how we have come to know all three by single names, as if they were modern day celebrities. And it was the widening of cultural influence beyond the insularity of any one city-state’s walls during the Renaissance that allowed artists to break out of anonymity.

The international renown of a few popular artists such as Rembrandt was slow to build at first, and their artworks commanded modest prices by today’s standards. It is the international culture of today and the concentration of great wealth among an ever smaller percentage of the population that has enabled the explosion in high prices for the artworks of a relatively small number of well known artists. The last great jump in prices was roughly during the Gilded Age around the turn of the twentieth century, when a great concentration of wealth created a new aristocracy of capitalists.

Now there is another concentration of wealth occurring, this time on a worldwide scale rather than limited to Europe and North America. Nothing has changed, of course: as always, the rich get richer. It’s the scale of wealth accumulation that has changed, and when artworks are selling for hundreds of millions of British pounds or American dollars, a mere million for a painting by anti-establishment artist Banksy is entry level stuff. The rich people sitting on mountains of the wealth of the world would not flinch at shredding a million pounds, and the irony of one artist’s rendering matters not at all to them as long as the artist’s growing fame increases their return on investment.
— Vita

10/8/2018 Update: Since last Friday, when Banksy’s Girl With Balloon partially shredded after being sold at auction for about £1,000,000, its value has increased by at least 50%, and may have doubled.