You Are What You Eat

December 29, 2016 Isidore Gnome
The garden catalog dreambooks are starting to arrive in the mailboxes of home gardeners as 2016 ends and 2017 begins. Those gardeners who have ordered from online companies in the past and haven’t unsubscribed from their email list are receiving notices in their inboxes. Winter is the time to sit indoors in warmth and comfort and look over the seeds and plants on offer, either by scrolling through websites or paging through catalogs.
Some garden suppliers tout their seeds as being “not GE” or “non-GMO,” by which they mean the seeds are not Genetically Engineered or produced from Genetically Modified Organisms. Of course they’re not, since those kinds of seeds are available only to commercial growers, not to home gardeners. A different, though somewhat related, concern some gardeners have is whether the money they are spending on seeds will ultimately line the pockets of Monsanto and a few other large agribusinesses because those companies hold the patents on thousands of seed varieties. 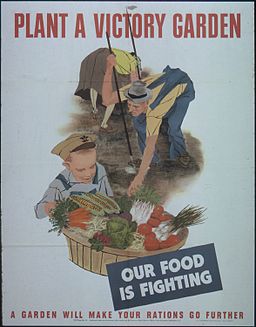 World War II poster from the
Office for Emergency Management
Home gardeners can allay their concerns on both counts by doing a little research on their suppliers. The GMO concern is easier to dismiss than the one regarding the ultimate source of the seed. The best thing is to rely on suppliers of heirloom varieties or on open source suppliers who create and share new varieties without taking out a patent. 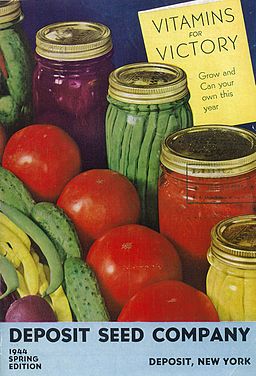 Deposit Seed Co. Victory Garden Catalog 1944;
poster from the USDA National Agricultural Library
A much larger concern for everyone, gardeners and non-gardeners alike, is the prevalence of GMO foods in supermarkets and restaurants. Gardeners at least can sidestep that by growing as much of their own food as possible. Everyone else needs to watch what they buy in the stores, and that is where labels stating “not GE” or “non-GMO” are most helpful since agribusiness has successfully fought off attempts to label some foods as “GE” or “GMO.” Agribusiness executives apparently believe, not without reason, that as the general public becomes better informed about these products it might come to view such labels with the same alarm as a skull and crossbones. Not good for business.
To cite the most prominent example of GMO products, there are the Roundup Ready crops of corn, soybeans, and cotton, which today constitute upwards of 90% of the supply grown in the United States. No one eats cotton, though as Joseph Heller portrayed with the character of the amoral capitalist, Milo Minderbinder, in his marvelous satirical novel Catch-22, it is not too farfetched to think of someone like that trying to convince people to eat cotton if he senses a profit in it. For the corn and soybeans that we do eat, and in prodigious amounts if we eat a lot of processed foods, where they are ubiquitous, the federal government has mandated supposedly safe levels of Roundup. Frankenfoods, indeed.
Lastly, gardeners who care about the fertility of their soil as well as their own health and the health and vitality of the plants they grow for food would do well to avoid using herbicides in their home garden. No matter what, there will always be weeds wherever gardeners and farmers cultivate fertile conditions for favored plants. Scientists have not yet discovered any weeds growing in the sterility of the Moon.
– Izzy