June 13, 2021 Vita Historia
“What made eradication possible was a really good vaccine and political support. There was a real incentive to do it. You don’t ask a cow if it wants to be vaccinated. You just do it.”
— Ron DeHaven, former CEO of the American Veterinary Medical Association, speaking about the eradication of rinderpest, a cattle disease related to the measles virus.

Rinderpest and smallpox are the only two infectious diseases that have been eradicated around the world. Smallpox is the only disease to be eradicated that infects only people. Eradication of other infectious diseases, like COVID-19 for one, is unlikely because there are alternate hosts in the animal population, and while it may be feasible to vaccinate domesticated animals such as cows to the point of herd immunity, it is unrealistic to think the same can be done for wild animals. 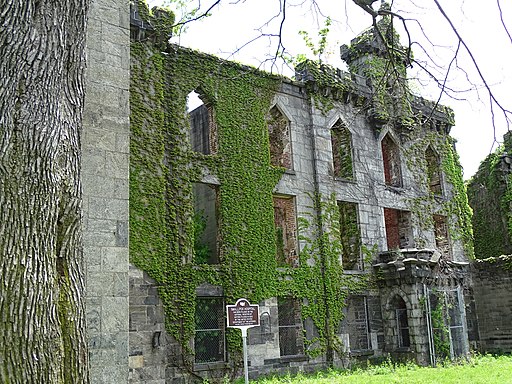 Ruins of the Smallpox Hospital built in the 19th century on Roosevelt Island in New York City. Photo by Flickr user Adam Jones.
Cows have another favorable trait in reaching herd immunity besides being easily available for their shots, which is that they don’t subscribe to bizarre, illogical, and unscientific conspiracy theories egging them on to refuse vaccinations, if that was a possibility for them. Rinderpest, like its cousin infecting humans, the measles virus, is among the most contagious diseases on the planet, and the more contagious a disease is, the higher the percentage of a susceptible population must be vaccinated in order to achieve herd immunity. For measles and rinderpest, that’s over 90 percent.
Smallpox is – was – in the middle of the scale as far as its contagious qualities, but among the deadliest at around 30 percent fatalities. Influenza, with notable exceptions throughout history, such as the 1918-19 Spanish Flu outbreak, is at the lower end of the scale for both contagiousness and deadliness. COVID-19, like the other Severe Acute Respiratory Syndrome (SARS) viruses to which it’s related, is higher up the scale for contagiousness than the annual flu, but it is nowhere near as deadly as smallpox, though deadliness as always is strongly affected by a victim’s socioeconomic circumstances. The poor, as always in any affliction, die in droves, while the better off have access to the best care and are less likely to be infected in the first place.

One by one through the nineteenth and twentieth centuries, diseases that had killed hundreds of millions over thousands of years were brought under control with vaccines and other public health measures, such as better sanitation. There have always been people of skeptical of the effectiveness of vaccines or suspicious of the motives of the medical people, often affiliated in one way or another with a government entity, who administered the vaccines. The difference in then from now is that before about 1980 evidence of a world without vaccines was still readily available to everyone, rich and poor, living in the industrialized northern hemisphere or in the largely agricultural southern hemisphere.

In 1947, when the threat of disfigurement or death from smallpox was still very real to everyone, the citizens of New York City lined up for blocks to receive vaccinations in order to stem a possible outbreak.
Today, people in richer countries no longer see the effects of smallpox at all, and rarely do they see the effects of less disfiguring, less deadly diseases like measles. If COVID-19 were to leave visible scars on those who suffered and survived, instead of just the internal scars it does leave, one wonders if at least some of the people ready to dismiss the seriousness of the disease and the severity of the outbreak would be as obstinate about complying with public health measures.

If there were still children crippled by polio in every neighborhood, would there still be people who are more willing to believe an insane theory about vaccines they read in their Facebook “news” feeds than the scientific fact of once rampaging infections brought to heel in the past two hundred years? No doubt there will always be some hard cases who can’t be reached through reason, no matter what. The amount of the U.S. population vaccinated against COVID-19 is currently about 43 percent, and it needs to be over 70 percent to reach herd immunity. It will be best to cross that threshold before cold weather sets in again, forcing people back indoors. If it’s not, then COVID-19, a disease that will likely never be eradicated, only controlled, could surge once more, making this summer of relative freedom appear in retrospect like a fool’s paradise.
— Vita