May 30, 2021 Editor
For industries teetering on the edge of irrelevance, the strategy to remain relevant has always been the same – deny their activities have caused a problem, debunk evidence of harm, and claim they are only giving the people what they want, thus shifting blame onto consumers. From the tobacco industry to the fossil fuel extractors and the pesticide and herbicide manufacturers, they all follow the same script as evidence mounts that the products they once touted as a boon to humanity turn out to be poisonous. Poisonous to mind and body. Poisonous to people, to animals, and to the planet. 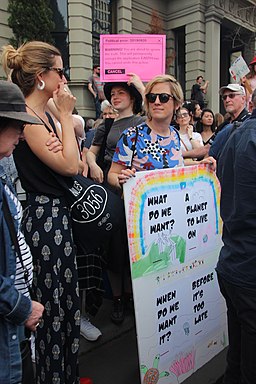 The Melbourne Global climate strike on Sep. 20, 2019, was attended by over 100,000 people, making it the largest climate protest in Australia to date, and rivaling the anti-war protests in 2003 and the Vietnam Moratorium in 1970. Photo by Flickr user Takver.
Add to the list of peddlers of poison for profit agribusiness and its processed foods, along with animal confinement operations and massive applications of fertilizers that deplete the soil instead of enriching it, ultimately leaching into the water every creature needs for survival. Give the people what they want. In entertainment, give the people gossipy reality television shows in the evening and mean-spirited confrontation programming in the daytime.

Social media companies give people information dressed up as news when it is nothing more than pandering to what they want to hear. If giving the people what they want absolves purveyors of poison from responsibility for their actions as they go about making money, then hardly anyone is responsible for anything. A sociopath is concerned only with what he or she wants, and whether the pursuit of those wants interferes with the rights and needs of others is material only to the extent that those others can obstruct the sociopath in achieving their desired end. That’s the society of imagined meritocracy and capitalism of “looking out for number one” that giving the people what they want instead of what they need has created.

The new Ford F150 Lightning battery-powered pickup truck is a step in the right direction of redressing these hypocritical imbalances in an energy hungry society. The original F150, the gasoline-powered one, has been the best selling vehicle in the United States for over three decades. The gas-powered pickup truck will still be available alongside the battery-powered version, but the investment Ford made in developing the Lightning was not insignificant. They could have developed a different vehicle altogether as their flagship entry into the battery-powered market. Putting that investment into a version of their biggest breadwinner, the F150 truck for the masses, is a big step toward making use of electric vehicles common.
A scene from the 1970 film Little Big Man, directed by Arthur Penn. Chief Dan George played Old Lodge Skins, and Dustin Hoffman portrayed the picaresque title character.
The development of the Lightning could do for electric vehicles what Ford’s innovation with the Model T did for internal combustion engine passenger vehicles over 100 years ago, namely make a new technology accessible to everyday people. Electric vehicle models have until now been popular only in niche markets, whether that’s more well off people with a need for sportiness driving a Tesla, or people whose need for merely getting around town could be met by a Chevy Volt. If the Lightning becomes as popular today as the Model T did in its day, then it could go a long way toward redressing the climate imbalances kicked off in large part by its predecessor.
— Ed.