January 31, 2021 Vita Historia
The finale of the National Football League season comes next Sunday with the Super Bowl contest between the Tampa Bay Buccaneers and Kansas City Chiefs at Raymond James Stadium in Tampa, Florida, and it marks the end of a season when relatively few fans attended games in person due to coronavirus social distancing restrictions observed by the league’s teams. Attendance at this Super Bowl will be limited to 22,000 fans, in a stadium that can seat over 65,000. For hard core fans used to watching the games in person rather than on television, it must have been a peculiar season. 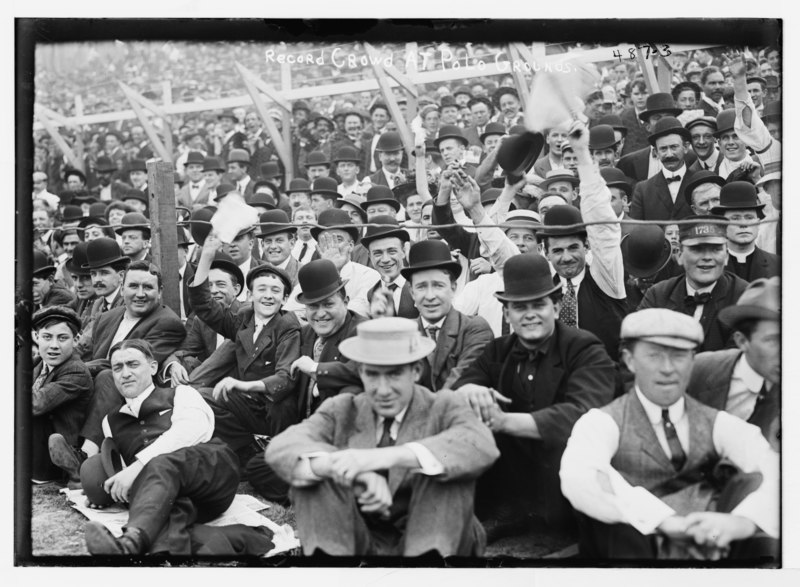 Crowd in the Polo Grounds grandstand for the final game of the 1908 baseball season, watching the visiting Chicago Cubs play the New York Giants. Library of Congress photo from Bain News Service.
To be at a stadium or ballpark for a game is to experience something beyond the game alone, which really can be viewed more intelligibly on a television screen or computer monitor from the comfort of home. The sports fanatic can spend hundreds of dollars for the experience, counting ticket price, parking, concessions, and other sundry expenses, and still the sports fan prefers bearing those costs instead of staying home to watch the game for free or at very little cost. One hundred years ago, there were no such contrasting choices.
At the beginning of 1921, there was no broadcast medium at all involved in bringing sporting events to the masses. In the United States, radio broadcasts of sports began later that year, with the airing of a boxing match on April 11 in Pittsburgh, Pennsylvania, and a baseball game on August 21 from Forbes Field in Pittsburgh. In both cases, the broadcasting station was KDKA in Pittsburgh. On October 8, KDKA broadcast a college football game. The first American television broadcast of sports didn’t occur until May 17, 1939, when NBC covered a college baseball game in New York City. Hard core sports fans didn’t get to listen to a sports talk radio show until New York’s WNBC started airing one in March 1964.

One hundred years ago, people either bought tickets to see sporting events or read about them the next day in a newspaper. Talking about sports was a first hand endeavor limited to friends, family, neighbors, and co-workers. Now there are several options besides buying tickets for vicariously experiencing athletic contests, and with sports talk radio and television shows and social media, there are many options for sports fans to gab on and on about their obsessions to familiars and strangers alike, both near and far.

One of the subplots from a 1995 episode of Seinfeld involving Patrick Warburton as David Puddy, the boyfriend of Elaine Benes, played by Julia Louis-Dreyfus. Michael Richards played Cosmo Kramer, and Jerry Seinfeld played a fictional version of himself.
Social norms of public appearance and behavior loosened after World War II and particularly in the ’60s and ’70s, resulting in sports fans changing over the 50 years from the ’30s to the ’80s from men (they were overwhelmingly men in the stands) who attended the games largely in suits and ties, to people who wore casual clothing, often comprised of the merchandised parts of their favorite team’s uniform. Some went shirtless and painted themselves in their team’s colors. In the 1950s, only little boys and some working class adults wore baseball caps regularly. Now, almost everyone wears one at least occasionally, and many of the caps bear team logos at a price. No one has to grow up anymore (or wants to), and sports merchandisers, who had very little business at all before the 1970s, are counting money in the billions each year now, even without sports fans filling the stands.
— Vita